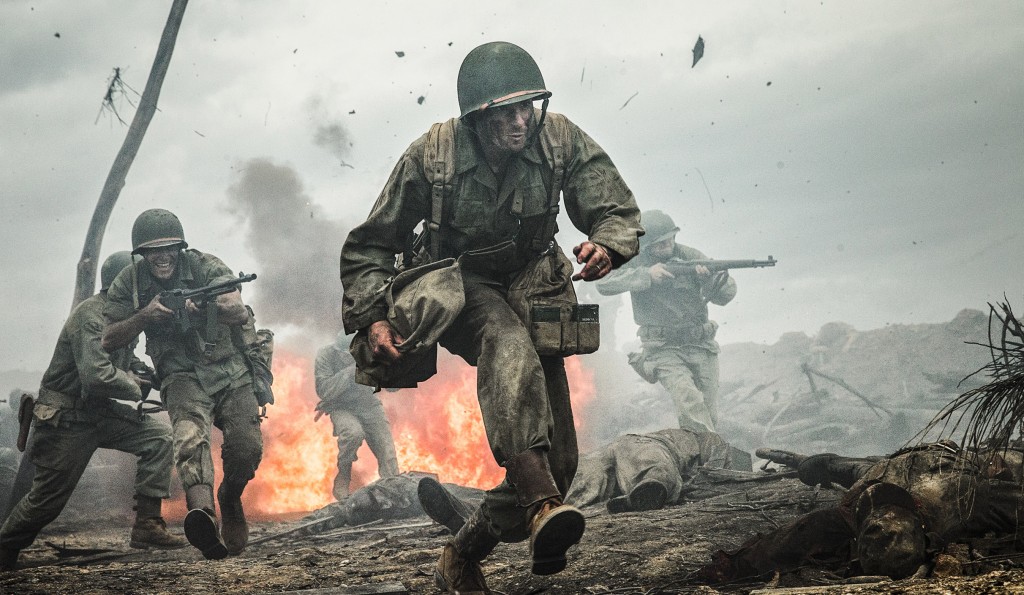 Mel Gibson Returns to the Battlefield with ‘Hacksaw Ridge’ HOLLYWOOD—One-time box-office golden boy Mel Gibson has been keeping a low profile for the past few years following a series of embarrassing incidents, including an anti-Semitic rant following a drunken driving arrest. But now the “Braveheart” filmmaker returns to the director’s chair—after a 10 year hiatus—to helm the epic World War II set drama “Hacksaw Ridge.”

The American-born, Australian-raised actor turned filmmaker assembled a cast of mostly Australians (Hugo Weaving, Luke Bracey, Teresa Palmer and Rachel Griffiths) as well as a notable Brit (“The Amazing Spider-Man’s” Andrew Garfield) to star in this film about a U.S. army unit sent on a mission to capture a near-impenetrable hilltop area of a strategic island in the Pacific from the defending Japanese army. Desmond Doss (Garfield) is an enlistee who also happens to be conscientious objector. A practicing Seventh-Day Adventist, it is against his religion to take up arms but he wants to help out in America’s war effort against the Japanese by signing up to be an Army medic. Narrowly escaping imprisonment for his refusal to fight, Doss demonstrates what it means to be a hero on the battlefield without firing a single shot. Pulitzer prize-winning playwright Robert Schenkkan (“The Kentucky Cycle,” TV’s “The Pacific”) and Andrew Knight (TV’s “Jack Irish”) co-wrote the screenplay based on true events.

The 60-year-old Gibson, nearly unrecognizable with a full bushy beard and greying hair, recently spoke about returning to the director’s chair after a long absence. (His last film 2006’s historic Mayan drama “Apocalypto.”)

Q: This movie, like most of the films you’ve directed, is gory and violent. Could you talk about your feelings about violence and about Desmond Doss, who does not want to kill or fight?

Gibson: I think the nature of the film has to be realistic in a war situation. Okinawa was the greatest loss of life in the South Pacific. Even the Japanese describe it as a steel rain of bullets, explosions and napalm. I wanted to make it real, so I think it highlights what it means for a man with conviction and faith to go into a situation that is hellish. It was a situation that reduces most men to the level of animals, and in the midst of this maelstrom, here’s a man who is able to hone his spirituality and achieve something higher, something above war and religion. It’s like he goes in and performs acts of love in the midst of hell. That’s the beauty of the story and the pinnacle of heroism.

Q: So is Desmond is like a Christ-like figure?

Gibson: I wasn’t specifically thinking that but there are some parallels. Christ was Desmond Doss’ hero and he lived right through the greatest act of love. It was proclaimed a greater man had no love but to lay down his life for his friends. What was Desmond doing the whole time through Guam, Leyte and Okinawa? He was practicing that. That’s why I think it’s a love story and not a war film.

Q: Faith is a big theme in this film. How does your faith influence you in your daily life?

Gibson: I’m a poor practitioner. I would like to have good faith, that’s why I see stories like this with a guy like Desmond whose faith is unshakeable (and) I’m inspired by that. Maybe I can take a leaf out of his book on some level. It’s not about religion so much as it is about faith and pure love, which is at the heart of God. As far as I go, I’m imperfect. I’ll sort my stuff out in private.

Q: Why didn’t you give yourself a role in the film and why did you choose who you did for the cast?

Gibson: I think the contribution by this cast is the best work any of them have ever done. I was really proud and pleased to stand back and watch it happen. They had to tread some fine lines here. Vince (Vaughn, who plays Doss’ commanding officer) and our adorable friend here (Bracey) weren’t necessarily doing things to make you like them, but they very subtly turned to Desmond whom they all despised and ridiculed at the beginning. It was deftly done by all the performers. I want to applaud all of them because it makes me look good. Teresa (Palmer, who plays Doss’ wife, Dorothy) how adorable is she?

Actually, I was in the movie. My shadow is in it. Also, my arm is in it. True story, I said, “Hugo (Weaving, who plays Doss’ father, Tom), come do this film.” Then the scheduling was such that he couldn’t do the scene in the courtroom, so I did it, my hand and shadow and stuff. So we green-screened him in later; he wasn’t actually there. Look what Hugo did; he did some amazing work. I was so pleased.

Q: Having shot an intense and gritty battle scenes for “Braveheart,” did that make you feel prepared for the battle scene you shot in “Hacksaw Ridge?”

Gibson: It’s a different thing. Sometimes you get into the hand-to-hand stuff, but medieval conflict is different (from 20thcentury warfare). In “Braveheart,” you’re kind of hitting each other with blunt objects, and in this one there are bombs and bullets; it’s a different thing. The degree of difficulty goes way up, believe me. I had about 25 percent less the budget of “Braveheart” and half the time. And that was a budget 20 years ago, all right. (He laughs.) This is an independent film that looks pretty good for what we made it for. It looks like $100 million but I think (our budget) ended up being $40 million.

Q: How long was your shoot and what did you do to help actors be better soldiers?

Gibson: I’ve spent a lot of time crawling around and getting dirty. I’m too old for this stuff right? I remember one time, I was running back and forth, and I slipped on something and killed myself. All of a sudden, guess who was there to save me? (He points to Andrew Garfield.) He was into his part. It was hilarious, and I was like, “Yeah fine get off me.” I think (we shot for) 59 days, which was killer. I think we ended up squeezing another couple of days out of it. There was a guy on this, nobody ever mentions the first AD. This guy was like a computer brain. He was very bright. His name was P.J. Voeten, and he was my right hand. He was kind of annoying at times because he’s like, “You’ve got to move on, We’re running into overtime,” and I’m thinking, “Shut up.” He really kept stuff cracking. I really owe an enormous debt to that guy for just his organizational skills, prowess and wit.

Q: Did you make an effort to hire Japanese actors to play Japanese soldiers?

Q: What are some of the lessons we can learn from Desmond standing up for his beliefs?

Gibson: Real superheroes don’t wear spandex tights. I think what Desmond shows is the most inspiring thing. He managed to transcend and get above the war. We’ve always had it, we always will have it. He’s gone above it in the midst of it and shown us a way to love. I think I already said this. That’s a vital message. The world’s in such a bad way. It’s been this bad before, and it’s going to get this bad again. It stings like a *****. We behave like that for 20 or 30 years and they we’re back at it again. History regurgitates itself. This is, hopefully, a word or reminder about the viciousness and brutality. I want you to feel appalled by it, but accentuate the other side of it. In the midst of it, some good can be extracted.