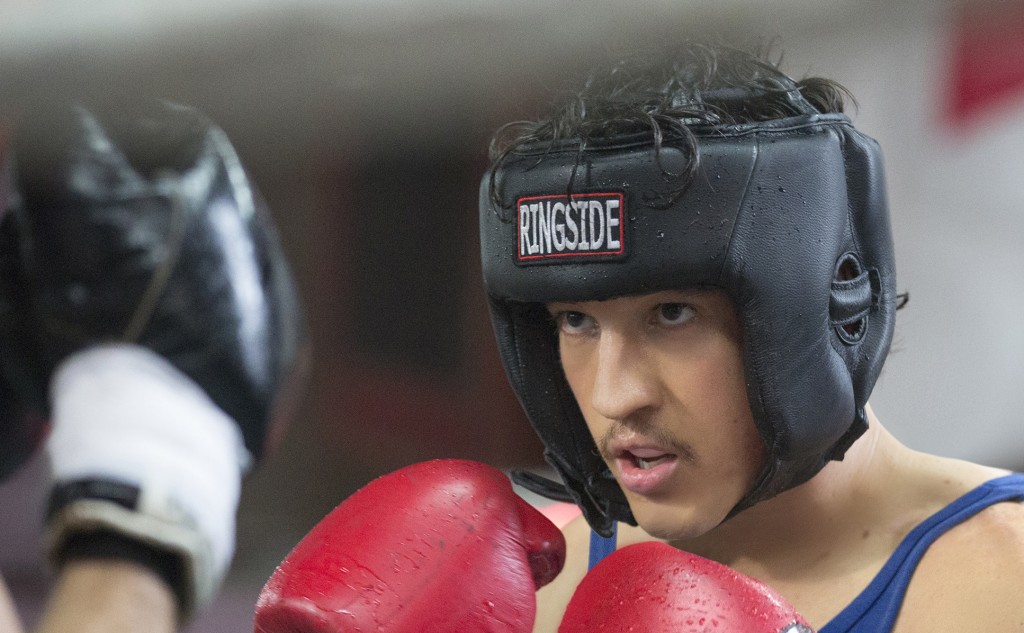 Miles Teller Goes the Distance in ‘Bleed for This’ HOLLYWOOD—Miles Teller memorably sparred with J.K. Simmons with words and drums in 2014’s acclaimed drama “Whiplash.” In “Bleed for This,” the rising young star plays an athlete who uses his fists and simple willpower to recover from a debilitating injury to return to professional boxing.

Teller plays real life boxer Vinny Pazienza, who was the junior middleweight world champion when he broke his neck in a car accident. Told by doctors he might never walk again, let alone box, the determined Rhode Islander enlisted his trainer Kevin Rooney (an almost unrecognizable Aaron Eckhart) to help him rebuild his strength and make a miraculous return to the ring. That perseverance as well as a “Halo,” an appliance screwed into his head to stabilize his spine, led to his recovery. The film also stars Katey Sagal, Ciaran Hinds and Ted Levine.

Teller grew up in South Jersey and then lived in a small town in Florida before making his screen debut 2010’s “Rabbit Hole” (which also starred Eckhart). He says he relishes playing blue-collar types and depicting a boxer in a movie was high on his bucket list. Once he landed the part, he trained with Los Angeles-based Darrell Foster, a former Golden Gloves champion whose previous clients include Sugar Ray Leonard and Will Smith (who played Muhammad Ali 2002). The six-foot tall actor spent eight months getting into fighting shape. The usual training regimen was particularly challenging because his character goes up two weight classes over the course of the film. Initially, he dropped 20 pounds through diet, reducing his body fat from 19 percent to just six percent. Then, in production, when his character decides to go up weight classes, he had to increase his dietary intake while maintaining muscle.

Besides the training regimen, the 29-year-old had to wear the uncomfortable Halo, which held his head rigid during most of the movie’s second act, but Teller says the discomfort was worth it. He met Pazienza (who legally shortened his last name to Paz and was nicknamed The Pazmanian Devil when he was competing) who held titles at lightweight, light middleweight and Super middleweight—the only professional boxer to do so. A dialect coach helped him nail the distinctive Rhode Island accent.

Q: What was the most difficult thing about Vinny for you to get—the accent, the workout, the Halo?

Teller: The physicality was very tough; to get that look for me and just to be able to have the conditioning to be able to shoot a boxing fight. That last fight in the movie was the only one where we went overtime, and that was like a 16-hour day. The last two fights were back-to-back days. Each fight took one day, which is almost unheard of. We shot the movie in 24 days, but to even just look like a boxer, I had to shoot two movies in-between, but that was eight months of just very strict diet and working out.

I lost 20 pounds, then got down to six percent body fat for the first fight, but Vinny also moved up in weight, won the title of lightweight and junior middle, and we showed that. That’s something very unique and special about Vinny’s legacy. He and Roberto Duran were the only two guys to win titles in those two weight classes, specifically. Once I had to gain weight it was fun. It was just like Dunkin’ Donuts and eating at Federal Hill in Providence, which has amazing Italian food.

Q: When did you film this?

Teller: I got cast two and a half years ago and we filmed it two years ago, so this was pre-“Whiplash.” I had never done anything where I got to just play a real person, who happens to be a world champion boxer. Even when I was on set, if I had any time in between, I was always doing something—push ups or sit ups. I didn’t walk into this movie with this God-given talent of being in shape. Even though it’s not really a talent. You just have to work out and diet. I didn’t want to be that guy with a six-pack and a tan who’s worried about his makeup and stuff.

Q: Did doing this project help you appreciate the nuances of boxing or is that something you already had as a fan?

Teller: I was a big MMA fan and I still am. I started watching it when it was the WEC (World Extreme Cagefighting) when I was in high school. With boxing, I always played the video games and certain guys like (Mike) Tyson and (Evander) Holyfield and Lennox Lewis—the heavyweights back then were kind of the big draws—but absolutely, once you start training in it, you gain even more respect. They say it’s the sweet science and you realize that it is very highly nuanced. I don’t see it as this barbaric blood sport; I see it as technique.

Q: What you’re thinking is very important to being a champion boxer. What was your strategy?

Teller: You have a game plan until you get hit in the face and then it all goes away, honestly, because we didn’t have a ton of time. The first fight in the movie I have against Roger Mayweather (played by real-life boxer Peter “Kid Chocolate” Quillin), I had five days to work with him. The second boxer we had a day and a half, and the third boxer, Edmond Rodriguez, one day. There were a lot of moments of free boxing. To do free boxing, so much of it just is mindset, and that was what Darrell really taught me. He said, “If you want to be a fighter in the ring we can choreograph it, but you’ve got to know these guys outside of the ring,” and that just comes from a certain mindset that they get drilled into them during training.

Q: Besides the training you also had to wear the Halo for much of the film. What’s the difference like when you’re reading about wearing the device in the script and then actually putting it on and wearing it around for days and days?

Teller: That was highly uncomfortable. Again, you don’t like to complain because for Vinny, it was actually screwed in his head. For me, it wasn’t actually screwed in my head, so we had to really make it as tight as possible, because if the thing moves at all, then it doesn’t matter what you just did in that take, you’ve got to do it again. It’s not usable because as soon as that thing moves people understand it’s not real, and it sucks. If this were a big budget studio film I would have had a ton of fittings with it, like I just did for (“Granite Mountain”), a firefighting movie. I had more fittings for my boots than I did for this thing. For this, one of our crewmembers just went to a hospital in Providence and got (a Halo device), and then we put little rubber pieces on the end and put it so far to my head that I could tell when it was in the right spot, because I had indentations in my head.

Q: Did it give you a headache?

Teller: I didn’t really get any headaches. I guess I was pretty durable.

Q: Did Vinny visit the set?

Teller: He was on set a little bit. There were certain things I wanted to talk to Vinny about; he’s a little older now. But I had a lot of (boxing footage) to build my character off Vinny 25 years ago, so that was important. The time that I absolutely said I need Vinny to be on set was when I go down to the basement and try and bench press for the first time, because I just didn’t know how to get underneath the bench with the Halo on. I had to ask him, “How did you do that?” He’s like, “Well, I’d get down here and I’d shimmy down there and then I’d start pumping them out, bro.”

Q: Did he see the film? What was his reaction?

Teller: He watched it with Ben (Younger, the director). He was crying and not at the parts that you would think. He was crying at the scenes around the dinner table, because his parents aren’t around anymore, and so those scenes were very touching for Vinny. I’ve gotten to talk to him about it and he says that means everything to him.

Q: Boxing is one of the most featured sports in cinema. When you signed on to “Bleed for This,” did you think, “What stands out here? What’s different?”

Teller: My job on this was just to play Vinny. I finished this movie before Mike (Jordan) shot “Creed.” I just remember that because we were doing “Fantastic Four” reshoots and his (movie) got pushed back. (Recent boxing movies like) “Hands of Stone,” “Southpaw” and “Creed”—we hadn’t seen any of those when we made this. It’s interesting. Everybody kind of gets the same idea at the same time. For me, personally, I was very excited to play a boxer. I didn’t know I would get that opportunity at 27. But I wanted to play a boxer and I wanted to play a soldier. I like playing blue-collar guys. Those are guys I can relate to and so I was very nervous about it, but at the same time, you get to play the boxer on screen and a guy like Vinny who was just always covered in blood, broke his nose in every fight and was just the biggest warrior and yet he had more heart than anybody. As a boxer, you have to risk paralysis, because you love (the sport) so much. That faith is going to be tested. How much you love the sport truly is going to be tested when you’re literally risking ever being able to walk again.

Teller: I want to do a baseball movie, but it could be anything, honestly. It could be the guy who’s a garbage man or he’s a construction worker. Vinny obviously is a bit of a historical figure, but I’m just inspired by everyday people—the guy who’s working three jobs to raise his kids. Doing that stuff is inspiring. Some of my closest friends are construction workers and military guys, so yeah.

Teller: Next I’m taking some time off. I did two movies this year and I’m going to do an animated film (“The Ark and the Aardvark”). This is the first time in probably four or five years I don’t know what the next thing I’m doing is and, for me right now, that’s probably a good thing.