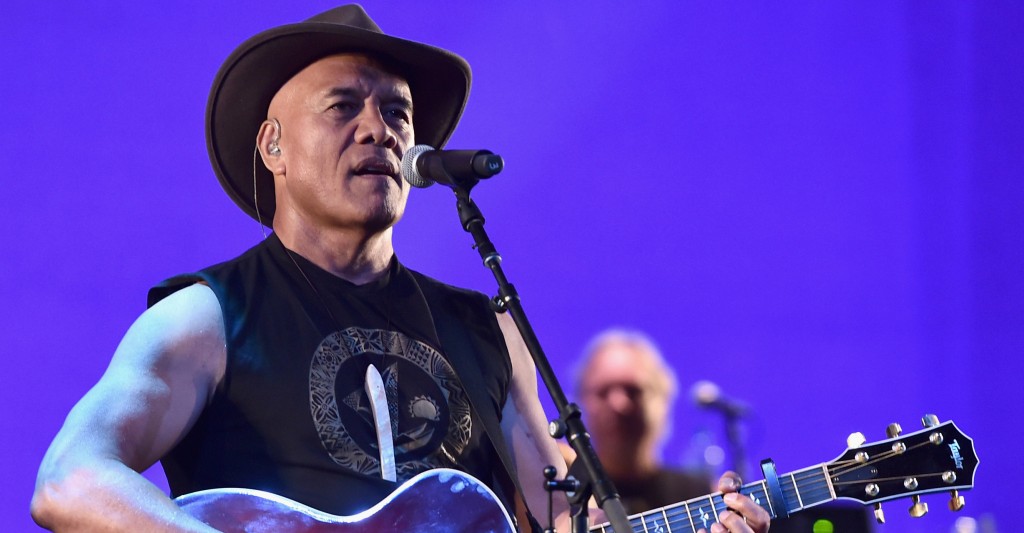 HOLLYWOOD—Opetaia Foa’i grew up about as far away from Hollywood as you can get—a small village in Apia in Western Samoa. But now he, along with “Hamilton” creator and star Lin-Manuel Miranda and Grammy winner Mark Mancina (“The Lion King,” “Tarzan”), have collaborated to create the sound for the new Disney animated musical “Moana.”

Polynesian music played an important part of Foa’i’s life from a young age, as did the tales of local culture and history. But his parents (his father was from Tokelau and his mother was from Tuvalu) had aspirations for their son, and moved the family to New Zealand when he was a boy.

“They wanted me to be a doctor or a teacher but I was just fighting against all those things,” recalls Foa’i, resembling Indiana Jones with his hat and rugged outfit.

Early in his career, Foa’i played music of other cultures but returned to his Polynesian roots in 1994, when he formed Te Vaka and began bringing contemporary Pacific Island music to audiences around the world. He released his first album three years later.

(l-r) Moana (voiced by Auli’i Cravalho) and Maui (voiced by Dwayne “the Rock” Johnson) in MOANA. ©2016 Disney. All Rights Reserved.

A few years ago, as the filmmakers were developing “Moana,” they heard Foa’i’s music and asked if he was interested in collaborating on the animated feature’s music.

“We wanted both the island character of the music and a narrative drive, so really we envisioned pairing Opetaia with someone, and we met Lin (Manuel Miranda) in New York before “Hamilton” was staged,” said Ron Clements, who co-directed the animated feature with John Musker.

Foa’i, who’d never worked on film before agreed to do it, if for no other reason than to ensure that the music in the Disney film would be authentic and respectful of the Polynesian culture.

The film centers on a teenage girl named Moana (newcomer Auli’i Cravalho) who against her chief father’s wishes, embarks on a daring mission to leave the island and return a magical stone to its rightful place on another island. She joins with Maui (Johnson), a demigod who stole the stone centuries earlier to make humans admire him. Initially, he is reluctant to help out but eventually agrees to join Moana on her quest to become a master wayfinder.

Foa’i was able to infuse the songs with dialects of his native Samoa as well as parents’ languages of Tokelauan and Tuvaluan. He recently sat down to discuss his involvement in the Disney film.

Q: When did you get started with the project?

Foa’i: It was December 2013. They brought me here to the animation studio. My job was basically to look after the cultural side of the movie and I’d like to thank John (Musker), Ron (Clements) and Osnat (Shurer, the producer) for gambling on me and including me in this movie. I’ve been in heaven for three years. Having Auli’i (Cavalho) is just incredible. She is the Moana voice that I always wanted. And then having Dwayne (Johnson) in there, it just sealed the whole thing. From a cultural side of things, I’ll give it a big tick.

Q: You started writing one of the songs right after you came onboard, right?

Foa’i: Yeah, “We Know the Way.” I wrote that on the plane home and recorded it when I arrived. I sent the demo in.

Q: You were brought in, in part, to ensure the Polynesian culture was kept authentic. In what ways were you able to do that?

Foa’i: I’m the only Polynesian on the (music) team so those elements had to come from me. I just didn’t compromise. I did it as I would do it. Then they would choose the bits that wouldn’t scare the children, and I’d go, “That’ll be fine.”

Q: Did you meet the voice talent for this?

Foa’i: Oh yeah. Not while they were performing. They had coaches.

Q: When you were working with Lin-Manuel Miranda and Mark Mancina, did you work via Skype or Facetime?

Foa’i: Luckily, Lin and I are quite fast. They would give us a piece and we would come up with various options back in Australia. Whenever we’d get together, there was a certain magic. We really enjoyed each other’s company, each other’s creativity. So it really wasn’t a problem.

Q: Your daughter Olivia has a song on the soundtrack and she also does some of the chants. Does she normally play with you in your band?

Foa’i: Yes, she’s been brought up in the Te Vaka so it’s in her body and she’s very very good. I used her for all the demos that we sent in. There are various elements throughout that are sung by her.

Q: Other band members participated too?

Foa’i: Yes, my two sons. They’re very very good. We brought all the drums in (to the recording studio) and played.

Q: Is there one song on the “Moana” soundtrack that is particularly close to your heart?

Foa’i: Because I’ve spent 20 years promoting my culture as wayfinders and sailors throughout so when they sent me home I wrote “We Know the Way,” which is about voyaging. My ancestors who were sailors and navigators were fierce; they were very confident. They’d go out to sea and not worry about huge storms so I felt the song needed to represent the confidence and power, which they have. That song, “We Know the Way,” does that.

Q: The songs are designed to move the story forward. Did you have the script to help you do that?

Foa’i: We Skype’d a lot. They sent me the script and we’d go through it. They’d say, “In this section here, maybe we could have some music,” and I’d match it up somehow.

Q: Did you also write lyrics as well as compose the music?

Foa’i: Yes. In “We Know the Way,” the first two verses are in Samoan. I believe that’s where voyaging came from. Then we met in Carmel and Lin put the English lyrics onto it. Whenever I can, I tried to sneak in Samoan.

Q: Were there other languages or dialects that you included?

Foa’i: Yeah. For example, “We Know the Way,” the chorus is in Tokelauan. (Tokelau is a small country in the South Pacific that is a territory of New Zealand.) You’ll hear chants throughout the whole (film). I tried to make it so that many islands in the Pacific can actually understand the words.

Q: Have you seen the film with an audience yet?

Foa’i: No, but I’m really looking forward to it.

Q: Where do you make your home these days?

Foa’i: I’m back and forth between New Zealand and Sydney (Australia).

Q: Are you working on something else?

Foa’i: Everything’s to finish off to promote this movie and then I’m going to tour again and make my tenth album—a studio album. I wanted to release a “best of” but Disney has asked to collaborate on a “best of,” so it’ll be No. 10.

Q: Are you hoping through this film to introduce Polynesian music to a broader audience?

Foa’i: Absolutely. I’ve spent over 20 years going to 40 countries. My band got sick and tired of me saying this but every time we’d play I’d talk about the ancestors and how they were the greatest, and how they lived—about Tangaroa, the god of the sea. These are insights into the culture and I think Disney’s just taken this and put it on practically every home on the planet. It’s an amazing dream come true. This culture—people will be interested in it.

Q: Would you come back to write music for a sequel?

Foa’i: I think I might let someone else do it. Three years is a long time.

Q: How important is music to you?

Foa’i: In my culture music is like breathing air. I was born in a thatched-roof hut. So to find myself here in a big city and (working with) Disney like this, it’s just beyond my dreams.

Q: Do you feel you were able to accomplish what you set out to do with the music in this film?

Foa’i: I can vouch for it that our ancestors are happy with this movie, culturally speaking. There are many other cultures that will see this movie and be interested in the movie but also there will be Polynesians who were born in the cities who will then start the journey back to the roots. That’s what I’m thrilled about.