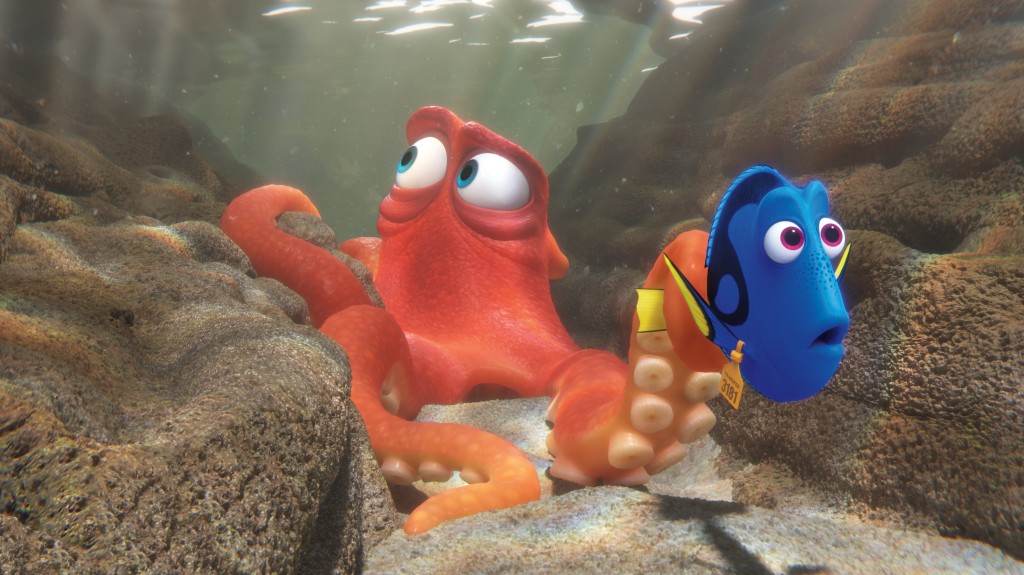 It’s hard to believe it’s been 13 years since “Finding Nemo” first swam into audiences’ hearts. While the beloved animated adventure’s long-awaited sequel, “Finding Dory,” may not live up to the high standards Pixar set for itself with “Toy Story 2” and “Toy Story 3,” it’s still a charming, beautifully told tale that was well worth the wait.

Although more than a decade has passed in real life, “Finding Dory” takes place just a year after Dory (voiced by Ellen DeGeneres) met Marlin (voiced by Albert Brooks) and Nemo (now voiced by Hayden Rolence). Audiences catch up with the friendly-yet-forgetful blue tang fish that now lives next to the clownfish father and son. One day, while “supervising” a class field trip with Mr. Ray (Bob Peterson), Dory bangs her head, which causes her to remember some details about her past—mainly, that she has a family of her own that misses her. Determined to find the mother (voiced by Diane Keaton) and father (voiced by Eugene Levy) she got separated from as a child, Dory sets off to “the jewel of Morro Bay, California”—with a little help from Marlin and Nemo so they can remind her where she’s going.

Rather than the big ocean blue being the setting for most of the film, the majority of “Finding Dory” actually takes place at “the jewel of Morro Bay,” which turns out to be the marine rehabilitation center and aquarium where Dory once lived. That one detail alone makes the film stand apart from its predecessor, providing a wealth of new characters and scenarios for Dory to encounter while searching for her parents. Although fans may notice some similarities between the two films—for instance, the possessive seagulls from the first movie are replaced in “Finding Dory” with territorial sea lions—for the most part the sequel isn’t a complete rehash of “Finding Nemo,” as the trailers suggest.

The fact that many of the film’s characters, like the cranky “septopus” Hank (voiced by Ed O’Neill, “Modern Family”) and the nearsighted whale shark Destiny (voiced by Kaitlin Olson, “It’s Always Sunny in Philadelphia”), are dealing with a disability like Dory and Nemo (who viewers might recall has one fin that’s smaller than the other) is also a nice touch, as it shows younger viewers who might be living with a disability of their own that they shouldn’t let that define what they can accomplish in life. While having Dory encounter several other animals with physical and mental limitations might seem a bit odd in the wild, since she’s at a rehabilitation center, the traits seem don’t seem that out of the ordinary.

The aquarium setting also sets up one hilarious scene that, without giving anything away, will make older viewers think twice about ever visiting a touch tank again with their children. There’s a recurring joke, too, involving the marine center and the vocal talents of a Hollywood A-lister that adults are sure to enjoy.

Of course, the true star of the film is DeGeneres, who once again perfectly plays Dory. The comedienne switches emotions with ease throughout the film, going from cheerful and friendly to sad and scared in seconds whenever the script calls for it. “Finding Dory” truly sinks or swims based on DeGeneres, and luckily her heartfelt performance makes Dory a well-rounded character that audiences can cheer for and sympathize with instead of just comic relief. Viewers will want Dory to “just keep swimming” until she finds happiness.

The Blu-ray/DVD Combo Pack with Digital HD (Walt Disney Studios Home Entertainment, MSRP: $39.99) comes loaded with hours of bonus content divided onto two Blu-ray discs. On disc one viewers will not only find the adorable “Piper” short that preceded the film in theaters (also available on the DVD release), but also an all-new mini short, “Marine Life Interviews,” where the animated stars of the film gush over Dory. Audiences will hear Hank talk about how Dory grew on him while the sea lions discuss the blue tang fish’s “forgiving” nature.

“The Octopus That Nearly Broke Pixar” turns the spotlight on Hank, as the filmmakers discuss the challenges of bringing the cranky septopus (who viewers learn used to have an addiction to hot sauce) to life. It’s interesting to hear how a typical animated character at Pixar takes six to nine months to get ready, but Hank took a whopping two to two-and-a-half years to finish.

“What Were We Talking About?” examines how the filmmakers never wanted to make it seem like Dory would be cured of her short-term memory loss by the end of “Finding Dory” but instead wanted to get the point across that if Dory cared enough for someone, she would never forget them. The extra also looks at how early drafts of the film had Dory’s parents suffering from short-term memory loss too, but that the jokes eventually got tired.

“Casual Carpool” is a fun, albeit pointless, short, where director Andrew Stanton drives Ty Burrell, Albert Brooks and Eugene Levy to work and picks up Ed O’Neill on the way. At one point, Brooks breaks into a story that’s censored by Hank, who appears out of nowhere to let viewers know that Brooks’ story is “not suitable for all ages.”

“Animation & Acting” shows the vocal talents behind the characters recording their lines for the film and just how the animators bring their performances to life.

“Deep in the Kelp” offers fans another glimpse behind the scenes as “Stuck in the Middle” star Jenna Ortega shows how the Pixar team went to the Monterey Bay Aquarium to do some research, even going so far as to putting a camera in one aquarium so they could accurately animate the kelp.

“Creature Features” offers some insight into the real-life animals featured in the film, with various cast members rattling off some facts about the creatures they portray on-screen. For instance, viewers will learn that all clownfish are born male and then some change sex later on from Albert Brooks; that the octopus has three hearts and a brain in each tentacle from Ed O’Neill; and that the beluga whale is known as the “canary of the sea” because of the sounds it makes from Ty Burrell. Viewers will also see Stanton making sure each cast member did their homework for this extra during the “Casual Carpool” featurette.

Rounding out the extras on disc one (as well as on the DVD release) is a feature-length commentary from Stanton, co-director Angus MacLane and producer Lindsey Collins that discusses everything from the importance of purple shells in the film to how the 3-D release of “Finding Nemo” led to the making of “Finding Dory.” Other highlights from the informative track include hearing how a visit to Disney California Adventure Park’s “Turtle Talk with Crush” attraction resulted in Crush’s return, what character the original voice of Nemo plays in the sequel and the actual names of the sea lions on the rock.

Disc two features more than an hour of additional content, including almost an hour’s worth of deleted scenes—“Losing Nemo,” “Sleep Swimming,” “Little Tension in Clown Town,” “Meeting Hank,” “The Pig,” “Dory Dumped” and “Starting Over”—with an introduction from Stanton about why each scene was cut. Most of the scenes aren’t finished and don’t even feature the actual actors reading the dialogue, with the exception of “Sleep Swimming,” which Stanton noted actually made it into one of the film’s early trailers before being cut from the film. Probably the most interesting deleted scene of the bunch is the series of prologues that comprise “Starting Over,” which shows the many different ways the film once began.

Five featurettes under the “Behind the Scenes” heading are included on the disc as well, including the interesting “Skating & Sketching with Jason Deamer” that looks at how drawing faces on coffee cups helped Deamer moved up the Pixar ladder from furniture mover to character art director on “Finding Dory.” It’s cool to see the unique approach Deamer takes to drawing each character, from picturing Nemo as a “drumstick” to Dory as a “flying ping-pong paddle.”

“Dory’s Theme” is a technical look at the scoring of the film while “Rough Day on the Reef” is a collection of funny computer mistakes from the making of the movie, like an albino Dory and humans that glow. The remaining two “Behind the Scenes” extras aren’t really so much behind-the-scenes extras as just fun little inclusions. “‘Finding Nemo’ as Told by Emoji” recaps the first film using only emojis while “Fish Schticks” shows footage of various characters from “Finding Dory” swimming and goofing around.

Four “Living Aquariums” (think of the fireplace footage on loop that’s so popular during the holidays) are included as well to add some animated ambiance to your TV screens: “Sea Grass,” “Open Ocean,” “Stingrays” and “Swim to the Surface.” “Swim to the Surface” is easily the most interesting of the bunch, as viewers get to see different schools of fish and even some otters swim by as the camera gradually moves toward the surface, with “Open Ocean” featuring the aquarium exhibit’s many fish inhabitants being the second best. “Stingrays” just shows some stingrays migrating on loop while “Sea Grass” is just that—sea grass swaying under the sea.

Unfortunately, the set doesn’t include a game kids can play to actually find Dory nor does it contain a collection of moments from DeGeneres’ talk show where she lamented that a sequel to “Finding Nemo” hadn’t been made yet.

While there are times the film and its corresponding Blu-ray release try a little too hard to leave a lasting impression on audiences, overall, “Finding Dory” is a must-own for any cineaste’s home video collection. Fans will be happy to be reunited with the characters from the first film and are sure to love the newly expanded “Nemo/Dory” family by the movie’s end. “Finding Dory” may not be as good as some of Pixar’s other films, but it’s still worthy of the Disney Pixar name and a film families won’t forget anytime soon.