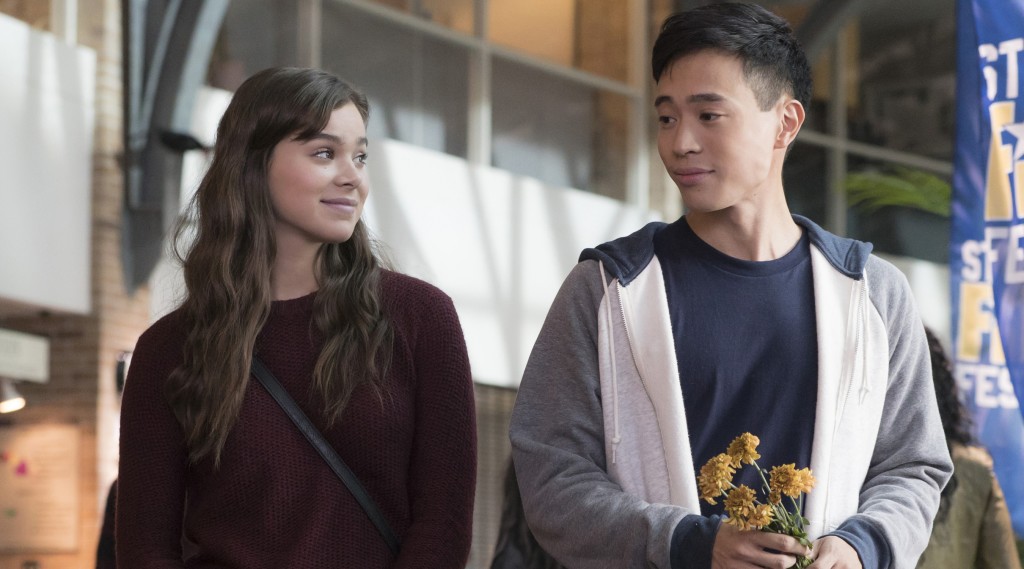 Hailee Steinfeld Gets Awkward in ‘Edge of Seventeen’ HOLLYWOOD—Hailee Steinfeld has worked almost non-stop since she made her debut in Joel and Ethan Coens’ 2010 Western “True Grit,” in which she earned an Oscar nomination for her supporting performance. The native Angeleno has since grown up on screen, and now with 13 films to her credit (notably the sci-fi actioner “Ender’s Game” and the music-filled comedy “Pitch Perfect 2,”) is a Hollywood acting veteran at the ripe old age of 19.

The tall, exotic-looking actress now stars in the coming-of-age dramedy “The Edge of Seventeen,” in which she plays square peg Nadine, a brainy high school student who can’t quite cope with the changes going on in her life. Having lost her father in a traffic accident a few years earlier, she lives at home with her barely coping widowed mother (Kyra Sedgwick) and her athletic and popular older brother Darian (Blake Jenner). Her situation goes from bad to worse when her only friend Krista (Haley Lu Richardson) begins dating her brother. Nadine also faces the usual assortment of adolescent crises: unrequited love and feelings of not fitting in at school, which she to share with her hapless teacher (Woody Harrelson) who isn’t prepared to help her. Helmed by first time filmmaker Kelly Fremon Craig (who previously penned the 2009 Alexis Bledel starrer “Post Grad,” about young woman going through post-college angst), the high school dramedy delves into universal themes about growing up, fitting in and finding one’s identity.

Steinfeld, who turns 20 on Dec. 11, spoke about playing Nadine, the flawed but likable protagonist, and how she tapped into her own experience as a home-schooled student to portray a girl who is feeling isolated and different.

Q: How do you think your own personal experience of high school helped inform you to play Nadine? What was it like for you in school?

Steinfeld: I was actually home-schooled through high school, so I think the not being in high school worked to my advantage (in this role). Feeling that real sense of alienation of being in the hallways of a high school, not really knowing where to look, I guess. What resonated with me more than anything was the growing up aspect; the daily questioning yourself of, “Who am I? What am I good at? What is my place on this earth? How and what do I do to fit in? Do I even want to fit in?” Those questions, I’ve asked myself daily for years. I didn’t feel in any way removed because I didn’t have a traditional high school experience. This character, for me, was a place that I could express what I felt as a person in the last few years of my life.

Q: What was your reaction when you first read the script?

Steinfeld: It didn’t occur to me that it was too much or not enough. It was just the perfect amount. It’s so perfectly captures everything about being a 17-year-old girl, including the language.

Q: How much fun was it in your classroom scenes with Woody Harrelson, who plays your exasperated teacher? Was it hard to get through without cracking up?

Steinfeld: Oh my gosh, they owe me an entire blooper reel of everything with Woody and me. I have never seen a human face turn so red before, just desperately trying to hold it in. There were so many (funny) moments with every person in this movie. I had the hardest time holding back laughter.

Q: How did you like playing your character Nadine as a 13-year-old with a bad haircut?

Steinfeld: That was weird. Obviously, the look we were trying to achieve was Pedro from “Napoleon Dynamite.” When I was fitting the wig, I wasn’t in front of a mirror so the first time I saw myself with the wig my heart kind of broke a little bit. I called my mom and asked if she still loved me. (She laughs.) It had a lot to do with helping me feel that young and I think we all have moments, regardless of how old we are of feeling like a little kid. She’s looking for love or attention from her parents, friends or whoever, and is confused by the fact that she can’t find it. So being in that sort of mind set of just feeling small and you feel young and you feel like you don’t really know anything was interesting. It was a weird thing, obviously, because here I am going on 20, but then sometimes I feel like I’m 13.

Q: Do you think teens today have a more difficult time communicating face to face because they are used to expressing themselves primarily through social media?

Steinfeld: Yeah, I think in some ways maybe everybody is a little more disconnected, because not only is there the whole thing where you’re putting a certain persona online that is not quite you, but can’t be. You’re also editing a lot of things out, because you like to be known as one thing. I think it gets harder to pull the curtain back on yourself and say, “This is who I really am,” just because there’s more fabric now.

Q: Did you feel comfortable giving input about your character to director Kelly Fremon Craig since you are coming from a young person’s perspective?

Steinfeld: I was given the trust and the freedom if I ever felt that way by Kelly, but very rarely did I feel anything was far off from how I feel it would be said or done. I read the script for the first time and felt like this is so much more than what I thought it was when I started reading it. There are some contemporary pieces where I know I’m going to have trouble figuring it out because, for example, I wouldn’t wear in real life what this character wears and because it’s just not me. I’ve always struggled with that in other contemporary pieces, but with this, everything about it just felt real, including the dialogue, the tone and the form of communication we used.

Q: Nadine is unafraid to articulate what she’s thinking. Does that make it harder for her, because she has the words to express all the crises she’s dealing with?

Steinfeld: Part of me feels like part of the time she’s just really good at convincing people that she has the words in her vocabulary to get through things, but sometimes she doesn’t always know what they mean. It was sort of like, “Here I am to intimidate you with what’s going on in my mind.”

Q: What do you think 18 will be like for Nadine?

Q: What are some teen movies you appreciate more as you’ve got older?

Steinfeld: (Cameron Crowe’s) “Say Anything” and (John Hughes’) “The Breakfast Club” are two that were formative for me and still I can’t not watch them if they’re on or I watch them annually.

Q: What advice would you give to someone who is 16-1/2? What would you tell him or her?

Steinfeld: I’m still figuring things out. I guess realizing when our parents say (an obstacle) is something we’re going to laugh about later, or someone we care about tells us that it’s just a moment in time, it will pass, to realize that and know that it’s going to get better.