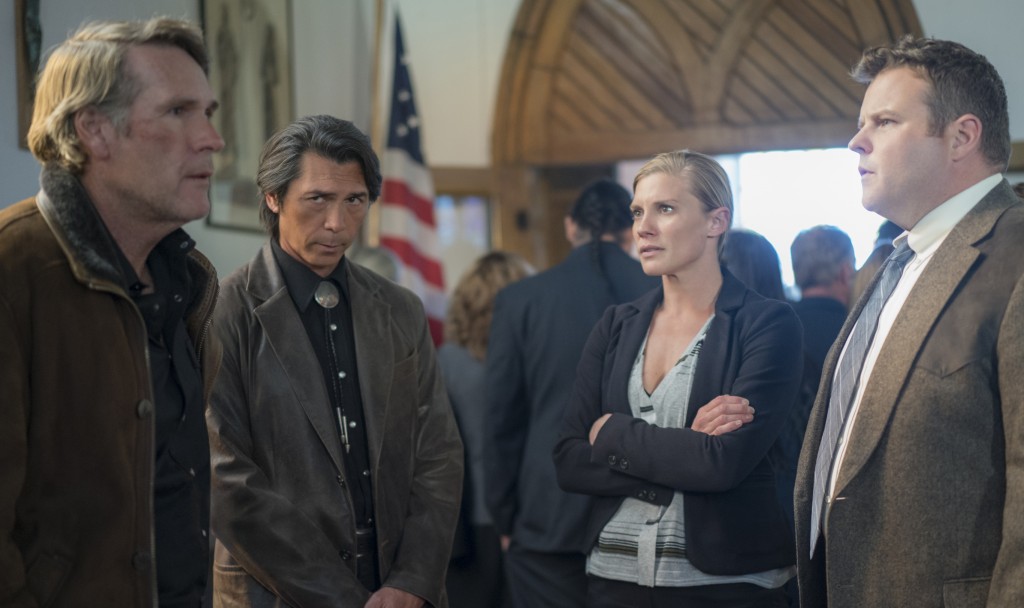 HOLLYWOOD—At the start of his career, Australian actor Robert Taylor was sometimes questioned whether he should use his given name or adopt a stage name. The reason: there was an American actor, popular in the 1940s and 1950s, who had the same name. Though the other Robert Taylor died in 1969, his legacy in films such as “Camille” and “Billy the Kid,” lingered.

The Aussie actor reasoned early in his career that “Robert Taylor” was the name he was born with and, by gum, he was going to keep it.

As time has passed, and the memory of American Robert Taylor has faded or has never entered the consciousness of younger moviegoers and TV viewers, the question seldom comes up any more. For the record, Taylor, 52, considers himself a fan of the other Robert Taylor’s work, and coincidentally enough, his career has followed a similar trajectory. He also evokes a certain manly stoicism onscreen that the Robert Taylor of a previous generation did.

The stage-trained actor has starred in a number of films including “The Matrix,” “Vertical Limit” and most recently the Will Smith starrer “Focus,” but for the past few years Taylor has established himself among TV viewers as the strong and steady lawman in the modern Western series “Longmire.” Originally aired on A&E, the series moseyed over to Netflix after the cable network inexplicably canceled it after the third season. (Ratings weren’t a problem; it was one of the most popular shows in their lineup.) With several storylines left unresolved, fans fretted over whether they would see what happened in the rural community of Absaroka County, Wyo. Not to worry. Netflix stepped up and production picked up where the last season left off. Ten episodes were shot for Season Four and, in typical Netflix style, were simultaneously released Sept. 10 on the subscription-based streaming service.

Back home in his native Melbourne, Taylor is taking a break, enjoying family time with his wife, producer Ayisha Davies, and their young daughter, Scarlet. He also is considering other projects he can do before production on Season Five, which isn’t confirmed but likely, begins next spring.

In his low-key way, Taylor says by phone that he is pleased that the series has found a new home, and he gets to further explore the many layers of Sheriff Walt Longmire, the central character in the series, which was created by Hunt Baldwin and John Coveny, and is based on Craig Johnson’s bestselling mystery novels. (Spoiler alert) Though saddened by the departure of good friend and colleague Bailey Chase, who played Deputy Branch Connally for three seasons, he is happy to welcome a few new members to the cast including Ally Walker, who plays Dr. Donna Sue Monahan and Gerald McRaney, who plays Barlow Connally, Branch’s wealthy and politically connected father.

Q: With the fourth season, the show moved from A&E to Netflix. Did that give you more flexibility with the series?

Taylor: People say we can do it differently, but can I assure you, it’s exactly the same. It’s the same executive producers and the main writers. I haven’t adjusted anything; I wouldn’t actually dream of doing that. The palpable difference is that the episodes are longer and all the beautiful language stuff and the stuff of the other characters that would get cut haven’t been cut. People like the show anyway, which is kind of how we ended up on Netflix. We needed to be true to the show we were making and we’re continuing to make the same show.

Q: With many TV series, viewers watch an episode a week, but now on Netflix, your viewers can download the whole series at one time, and binge watch the show.

Taylor: (chuckles) I know. I did it myself with “Bloodline.” I signed up to Netflix and it worked beautifully. I ended up losing three days. I hardly get a chance to watch TV at all but after seeing that show, I thought, “That’s the way to do it!”

I’d finished (shooting Season Four of “Longmire”) and I just needed to do nothing for a few days so I watched my old buddy (fellow Australian actor) Ben Mendelsohn tear it up on that show.

So I’ve been reading online about people watching (“Longmire”) and then they complain about spoilers, so you wonder why they’re going online to read other people’s comments. I think it’s actually a better way to watch shows—watch them when it suits you.

Q: The theme on “Longmire” this season is “Second Chances,” and it kicks off in a big way with you going after your wife’s killer and then discovering a body. Were you excited to see how the cliffhangers of Season Three were going to play out in Season Four?

Taylor: I knew that Bailey, who’s a good friend of mine, wasn’t coming back. I’ve got to say that Bailey’s kept that a secret for 12 months. He finished shooting Season Three 13-14 months ago. He’s been such a trouper keeping it quiet and not revealing the fact he’s not there anymore. He’s such a good guy. It couldn’t have been easy. I don’t know how he did it, to be honest.

Q: What did you think when you saw the first script of the season?

Q: You have a new love interest this season with Dr. Monahan…

Taylor: Well, “love” may be a strong word.

Taylor: Yeah. There’s something there.

Q: Can you talk about working with Ally, and Walt having this new lady in his life?

Taylor: It’s been different. I keep thinking, “Well, why not?” The sun is shining and the grass is growing. Spring is here and summer’s coming. My character’s dealt with his wife’s death. He’ll never ever get over it and yet something feels as though it’s been resolved. The character realizes he has to keep moving forward and be open to some different things; I don’t know where they’ll lead. I don’t know whether they’ll lead anywhere at all but he’s listening to the birds and smelling the flowers and that’s pretty good, so we’ll so. I don’t know where that’s going to go. I never know. I kind of like the fact that I don’t know. They’re always telling me they want me to come in and talk about the (upcoming) season and have all the actors come in and talk, and I say, “I don’t want to do that.” I want it to be a surprise. The older I get as an actor and the more acting I do, I think it’s about the immediacy; it’s about the moment. I don’t want to know what’s going to happen in six months because I’m not playing that. I’m playing what’s happening in this minute.

Q: You have 43 episodes under your belt. At this point, do you think we’ve seen all aspects of Walt, or are there more layers to him that we can expect to see as viewers?

Q: Have you talked to Hunt Baldwin about what might be coming up for Season Five?

Taylor: We’ve chatted. They tell me stuff and I say, “Don’t tell me!” Luckily, I’m forgetful so I forget what they told me already. If we go back, it would be in March. We’re hoping. I don’t see why they wouldn’t keep making it, but you never know. Stranger things have happened.

Q: What are you doing during your hiatus?

Taylor: I’m doing a couple of movies but I can’t say too much because we’re finalizing stuff. I hope to be back in L.A. in a couple of weeks. I’ve got to go to Sydney tomorrow. I’ve got my kid. Luckily, she’s 4-1/2 and she knows absolutely everything about everything. She’s running me ragged. She’s a genius. She’s pretty much running the show around here. I’m running around after her a lot, which is fine.

Q: Does your family join you when you’re shooting “Longmire?”

Taylor: Oh yeah. Next year, Ayisha (Davies) is producing a movie while I’m shooting in New Mexico, so she may only be able to come for a couple of weeks. I don’t know about being away from my little one for that long. It’s a long time. Thank goodness for Skype.

Q: When you first were cast in “Longmire,” was there a particular Western star or actor that you tried to emulate. Your character is a throwback to the strong, silent type.

Taylor: Not specifically. But I’ve always been a fan of that quiet kind of stoicism. So when the role came up and called for that kind of quietness or soulfulness—I like seeing that myself—you don’t see it that often these days. You would see it in actors like Gary Cooper and Clint Eastwood who were like that. But I didn’t base my character on any of those guys. I guess there’s a similarity but I wouldn’t dare compare myself with them. It would be arrogant and wrong. But there is a similarity in the roles that they might have played, that quietness. I was certainly cognizant of that.