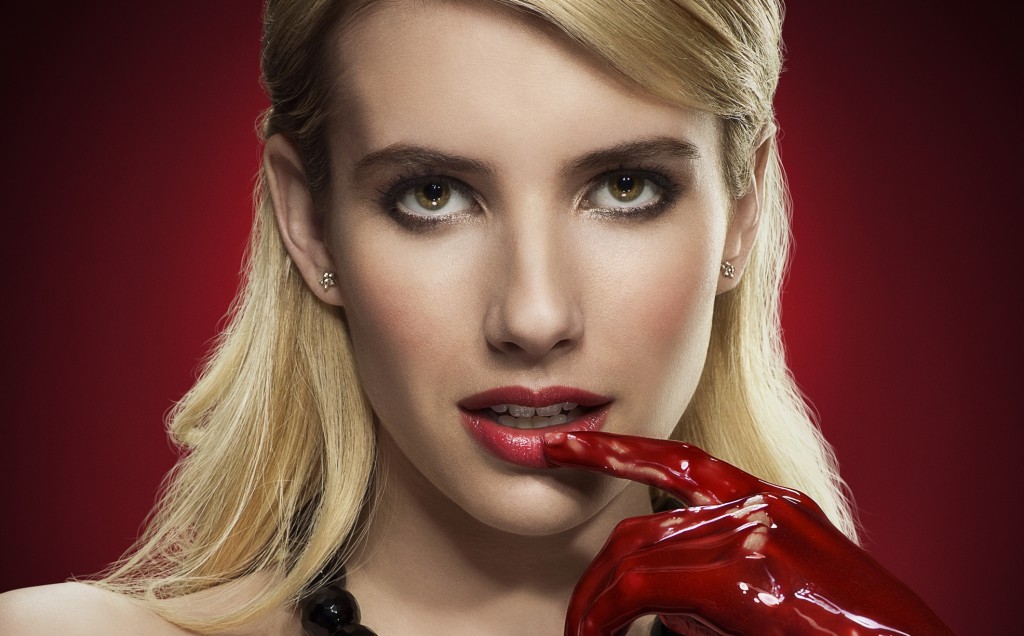 By ANGELA DAWSON and JUDY SLOANE

HOLLYWOOD—Emma Roberts, 24, grew up in a show business family. Her aunt is Oscar winner Julia Roberts. Her father is Oscar nominee Eric Roberts (“Runaway Train”), and his ex-girlfriend Kelly Cunningham. Having gotten her acting start at age 9 in Ted Demme’s “Blow,” she has since enjoyed a successful career in teen movies (“Aquamarine,” “Hotel for Dogs,” “Scream 4”)  mixed with an assortment of more mature independent fare (“Lymelife,” “Palo Alto”).

The petite actress stars in the upcoming Fox TV series “Scream Queens,” playing Queen Bee Chanel Oberlin (as a blond) at what turns out to be a deadly Kappa Kappa Tau college sorority house. After a series of mysterious murders take place on campus, everyone in the house is a suspect, including undisputed mean girl Chanel. The murders are somehow linked to an incident that occurred at the residence some two decades earlier. Viewers will be kept guessing throughout the 13-episode season while being introduced to a host of offbeat and quirky characters. The series premieres on Fox Tuesday, Sept. 22 8 p.m./7C.

The comedy-horror series is the brainchild of “American Horror Story” and “Glee” co-creators Ryan Murphy and Brad Falchuk and “Glee” alum Ian Brennan. All three serve as executive producers/writers/directors on the tongue-in-cheek Fox series.

In addition to the new TV series, Roberts has no fewer than four upcoming feature films including the dramedy “Ashby,” alongside Mickey Rourke and Nat Wolff, the horror film “February,’ with “Mad Men’s” Kiernan Shipka and the young adult thriller “Nerve,” in which she stars opposite Dave Franco.

The New York-born actress recently spoke at the Television Critics Association Summer Tour about the new series, working again with Murphy and Falchuk, playing a mean girl and more.

Q: Having done “American Horror Story” and “Scream 4,” you’re no stranger to the horror genre. So movies or shows scare you?

Roberts: I’m really easily scared. I was covering my eyes through most of “Scream 4,” and I was in the movie! I saw it with my mom. She was like, “Honey, I love you, but I have to step out for a moment because I’m too scared.” I said, “You’re too scared? It’s me!” So we were all horrified. I was sitting next to a bunch of people, and we were all in our seats with our knees up (while watching the film).

Q: As the person who has to deliver some indelicate lines to your co-stars, have you flinched reading the scripts? Have the creators had to talk you into saying certain things, or are you on board with it all?

Roberts: No, I’m on board with it all, but you read it sometimes and you’re thinking, “Oh, my God, this is insane and this is crazy, and who talks like this?” but once you start going there you kind of accept your character and come from her point of view, and know that this also is not real. It’s this imagined world and it’s kind of insane, crazy and fun. But, yeah, there are definitely times when I had to apologize to the girls when “Cut” was called. Q: How is it playing Chanel so far?

Roberts: It’s been fun more than anything. I think the way these amazing men (Murphy, Falchuk and Brennan) write for us is so smart that even the insults, you can’t help but laugh at them.

Q: What do you enjoy most about the writing?

Roberts: What I love is when I read the (first) script, I saw a dynamic between all the girls I think we can all relate to. When you’re in school, you get thrown into a group of people, and everyone has such specific personalities. You’re kind of forced to find where you fit in in that group. You also have to figure out how to interact with people that you may not get along with or you don’t know very well. And I love that all of the characters, when I read the script, have such specific personalities and —because of a certain situation—are thrown together in this sorority and basically have to make it work.

I love, every week, reading the scripts and seeing who all of a sudden has become friends, who has become enemies and how everyone is interacting with each other. To me, that is the most fun about reading every script every week.

Q: Do you and your co-stars feel like you’re part of a sorority now?

Roberts: Yeah, there’s our own sorority within this fake sorority, for sure.

Q: Playing a hip young college girl, are you familiar with how girls this age talk to each other?

Roberts: Abigail (Breslin, who is 19) is always teaching us all the new lingo. Abigail’s always telling us what everything means.

Q: How is it working again with Ryan Murphy and Brad Falchuk?

Roberts: They’re the coolest. They make all of us look really good.

Q: The college isn’t set in a specific geographic location but you’ve been shooting the show in Louisiana. How do you like it there?

Roberts: I love it there.

Q: So far, you’ve shot eight of the 13 episodes of the first season? Do you eagerly await getting a new script every week? Are there ever any surprises?

Q: Your character, Chanel, is pretending to be something that she’s not. Part of the fun of that character is peeling away those layers and seeing her vulnerability, which the audience finds out over the course of the season. Are you excited about seeing where Chanel comes from and why she is the way she is?

Roberts: Yes. That’s something that (the show’s creators) do so well. They make characters that aren’t necessarily good or bad or who seem good, but aren’t, or who seem bad, but aren’t. There are so many different layers to everybody. Nobody is black and white, and you’ll see that as the season goes on with the show. We don’t know who the killer is.

Q: What kind of film or TV show would you eventually like to do that you haven’t done yet?

Roberts: I’d love to do more action roles. I’m not very athletic, though. I always played girls sports at school. I was never really a big sports person. I’ve never been able to really run convincingly.

Q: You mentioned your mom. How much of an influence has she been in your career and what’s the best advice she’s given you?

Roberts: She told me to sit up straight and please don’t swear.

Q: Have you ever been able to scare anyone?

Roberts: No, I’m not good at scaring other people but I get scared very easily. My sister (Grace) used to scare me with things like fake spiders in my bed.