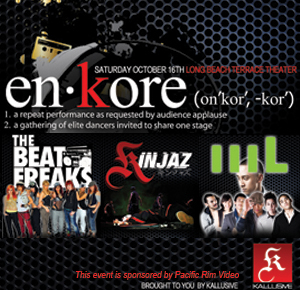 With the success of MTV’s “America’s Best Dance Crew” dance competitions have come to the forefront of mainstream America. EnKore: The Dance Competition will feature a battle between Toybox of Kinjaz against Ritchie Ramirez of CSLA in the house dance exhibition battle. A second battle of popping skills will be between ‘Pacman’ from So You Think You Can Dance and ‘Devious’ of John Chu’s LXD.

The Beat Freaks of “America’s Best Dance Crew” fame will woo the crowd with the exhibition performance along with other exhibiting dance companies including Kinjaz, directed by Mike Song and Anthony Lee. Movement Lifestyle, whose individuals have choreographed for Korean superstars Big Bang, Se7en, Taeyang, and 2ne1, will be collaborating to bring a collaborative performance together for EnKore.

Pacific Rim Video will be there to capture the red carpet arrivals along with backstage coverage. For more information and to purchase tickets, visit kallusive.bigcartel.com/