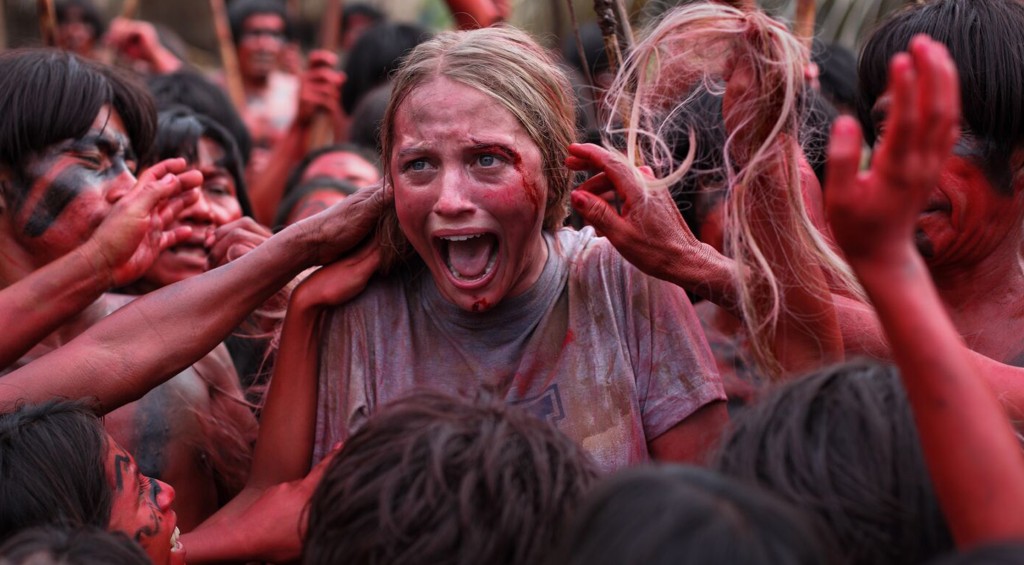 HOLLYWOOD—After enjoying the ultimate fantasy of playing a character that assassinates Hitler in Quentin Tarantino’s alternate universe World War II sendup “Inglourious Basterds,” Eli Roth has gotten back to his filmmaking roots with two new horror movies due out within weeks of each other.

The first is “The Green Inferno,” inspired by the growing influence of social media, for better or worse, on young people. A few years ago, Roth, 43, already was working on a screenplay about a group of college students who try to solve the world’s problems by using online videos to publicly shame anyone they see doing wrong, when real life intervened. An organization called Invisible Children made a video called KONY 2012, which urged viewers to help take down Ugandan warlord Joseph Kony. Though it became an Internet sensation, the campaign came under fire for its oversimplification of a complex political issue, and the young organizer of the movement taken to task.

“After we finished the script, we were getting on a plane, and all of a sudden our Twitter blew up and everyone’s going, ‘What’s wrong with you? Don’t you care about child soldiers?’” the filmmaker recalls. “We were like, ‘What is this?’ Everyone’s got this high and mighty self-righteous attitude about something they hadn’t heard of 24 hours earlier. A month later (the cause) was Free Pussy Riot, and if we didn’t Tweet about these girls, then we must be against freedom of speech or we hate women. People were going crazy.”

Roth says the controversy surrounding the KONY 2012 fiasco validates “The Green Inferno’s” conceit—the idea that “slacktivism” is sometimes a way for social media users to feel like they’re doing something positive about horrific events that actually are well beyond their control. Besides offering a society commentary on a 21st century trend, the film also is a bloody, horrific tale about not so selfless affluent do-gooders and a tribe of cannibals they meet in the Amazon jungle.

“The Green Inferno” marks the first collaboration between two modern masters of horror: Roth, who is best known for his wildly successful “Hostel” and “Last Exorcism” franchises along with his cult classic “Cabin Fever,” which is now being remade for yet another generation of horror aficionados, and Jason Blum, the successful producer of “Insidious,” “The Purge” and “Paranormal Activity” franchises, through his BH Tilt production company.

“Jason and I have been looking forever to work together on a project,” Roth said. “It’s perfect that this is the first one. We had such a fun time. We see things eye to eye. That’s the pleasure of working with him—he really protects the filmmakers and gives them freedom, and he has the muscle to get your movie out there (to an audience). Nobody else could have gotten this movie released other than Jason Blum. Nobody.”

Roth also directed and produced the upcoming suspense thriller “Knock Knock,” starring Keanu Reeves as a married architect, whose world is turned upside down by two beautiful young women who threaten to destroy him after they seduce him. It is available On Demand and in theaters Friday, Oct. 9. Both films star Roth’s real-life wife actress Lorenza Izzo, who delivers two very different performances in these completely different, yet equally disturbing horror movies.

Roth spoke about his returning to the horror genre under Tarantino’s influence, working with Blum and what’s ahead.

Q: How has your approach to writing and directing changed since you played The Bear Jew in “Inglourious Basterds?”

Roth: This is the first movie I directed after having acted under Quentin, and it changed the way I wrote. When you’ve acted opposite Brad Pitt, Christoph Waltz and Diane Kruger, it changes the way you approach writing a character. You’re really approaching it from an actor’s point-of-view. There was so much I learned from Quentin, from the way I write the characters to ditching the monitor (on set). For “The Green Inferno,” we didn’t have a monitor, chairs or even trailers. We were truly in the Amazon, which gave the film a certain kind of energy, a certain kind of look. I was operating the camera a lot. I was in the movie.

Q: What inspires you to write these horror movies?

Roth: “Cabin Fever” came from fear of AIDS and disease. “Hostel” came from my reaction to George Bush’s America of policing the world and this feeling of invincibility, that Americans can buy and sell anything and they become the thing that is bought and sold. “The Green Inferno” came out when we saw this Twitter shaming that was going on. Now that we have this connectivity—and I believe social media is an amazing tool like what happened with Arab Spring, and what went on with Ferguson (Mo.), you can see the news as it’s happening and you can call people out on terrible injustices—but as you see with the kids in “The Green Inferno,” it’s not that they care about saving the rainforest, it’s about being recognized for caring. It’s not when they chain themselves to the trees and do the protests. When they stop the protests, they’re crying, they’re upset and thinking, “What the heck did we get into?” But when CNN retweets them, that’s the party. They made the home page of Reddit.com. Those are the people I want to see cry.

Q: What sets your horror movies apart from others in the genre?

Roth: The haunted house is never scary the second time through. The first time you see the movie, the blood (you see in it) stains your eyes, and you come out with those images, but this is one of those movies that you can watch again and again and again and (you pick up little nuances). When you give people something to chew on, the second time they’re watching it, they’re not watching a horror movie. They’re watching an adventure movie.

Our first battle was making the movie. The second battle was rescuing and saving the movie and Jason (Blum) was amazing. We like horror films. We don’t want to make a movie that plays just to one weekend. We want a weekend 15 years from now where people are still talking about the movie, and that’s what Jason does so well.

Q: How was it working with Jason Blum?

Roth: What I love about Jason is whether it’s (him producing) “The Normal Heart” or “The Jinx” or “Paranormal Activity,” the definition of what the Blumhouse movie is changing. And this has the Blumhouse trademark of not going for the obvious ‘Boo!” This is a movie set in the jungle and yet it fits in the moving forward of a different kind of Blumhouse film.

Q: What were the biggest challenges, such as the rituals, in the film?

Roth: For the rituals, I really did a lot of research. It started with National Geographic, in terms of the way the villages look. We looked at indigenous tribes of Brazil, from Peru and also from Africa. We kind of pulled from an amalgam of sources. I wanted it to look and feel like a real village. We looked at native rituals and how they treat invaders. We also looked at how you infiltrate a protest. We wanted the village to look real. So we got on the river with our producer Miguel Asensio and (associate producer) Gustavo Sanchez from Peru, and went up the river. I saw a straw hut and a girl washing clothes when we pulled up, and it turns out that was the girl I cast who helps (SPOILER ALERT) Lorenza escape. We looked around and thought, “This could be perfect.” It was so remote, they didn’t have electricity or running water. We had to explain what a television was, what a movie was. They’d never seen ice cubes before. We brought in a cooler and it was the first time they’d had cold drinks. A lot of the old people had never been outside of the village before. They were the greatest extras ever because when we’d take a selfie, they had no awareness of the camera.

Q: Shooting on location in the Amazon, did you feel like you were corrupting the villagers with Western technology?

Roth: No. In that village, they’re farmers. They’re not an indigenous tribe. The middle school kids go to school in a nearby town. As cut off as they were, the kids knew who Justin Bieber and Pitbull are. They were about to get telephones and electricity. We asked if they’d wait for a month while we shot the movie. By the end of the shoot, they started putting up telephone poles and electric wires. So everyone loved having us there. They felt like we were going to share their little village with the rest of the world. And even though they’d never seen a television or a movie, they all tell stories.

When we put them in the makeup and hair, they had that indigenous look. But they wore sports clothes afterwards. And they gave us ideas. One day, I turned around and one of them was holding a baby python. They thought it would be funny if they threw it in the cage with the Americans, and I said, “That’s a really good idea!” So, I asked, “Who wants to get a python in the face?” So we used it with Kirby and if you freeze-frame you can see that we got pretty close to Kirby’s eye

Q: Can you talk about the casting for this film? It’s a mix of Latin and American actors.

Roth: When you audition these actors, you have a sense of what they can do. Like with Daryl Sabara (the “Spy Kids” franchise), I just knew he could play Lars. We wrote Justine for Lorenza (Izzo). I learned on “Hostel,” if someone can act, then they can scream. The screaming is not the hard part. The villagers were amazing. The guys, even the 70 year olds, were really strong and cut. We were like, “Who’s your trainer?” They’re farmers. They eat fish. And they walk miles so they’re insanely in shape. They could really throw (our main actors) around. There was a real camaraderie. When we yelled ‘”cut,” everyone was laughing.