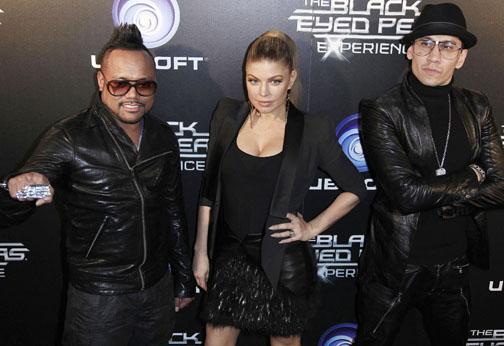 There was no supper at the Supperclub Los Angeles in Hollywood this past Monday as celebrities and guests came out to dance with Taboo, Fergie & Apl.de.Ap as they launched their new dance video game from Ubisoft aptly named “The Black Eyed Peas Experience.” The club was filled more with screens featuring the BEP video game.

At the same moment, Taboo was more surprised as he approached Arevalo announcing to everyone on the carpet, “That’s my sister!” He was so proud to have his sister interview him and the other two during the game launch.

Getting back to the game, Fergie was excited that they made her character as tall as Taboo. Fergie added, “Ubisoft has been so wonderful. They did us justice. It’s a huge compliment.”

From celebrity guests Christy Carlson Romano to Erin Sanders of “Big Time Rush”, many of the celebs couldn’t wait to try out the game and dance to “Let’s Get It Started.”

As the party moved from the black carpet to inside the club, guests tried out the game, posed in the picture booth, snacked on cupcakes and sipped some mixed drinks made from Vuqo Vodka. One favorite drink special that was a rave was the Calamansi Juice Mojito.

Ending the night, the peas sans Will.I.Am (who was sick at home) gave the crowd a treat with an impromptu performance as they sang to various BEP songs.

For video interviews from the carpet visit youtube.com/pacificrimvideopress and photos from the event visit pacificrimphotopress.com