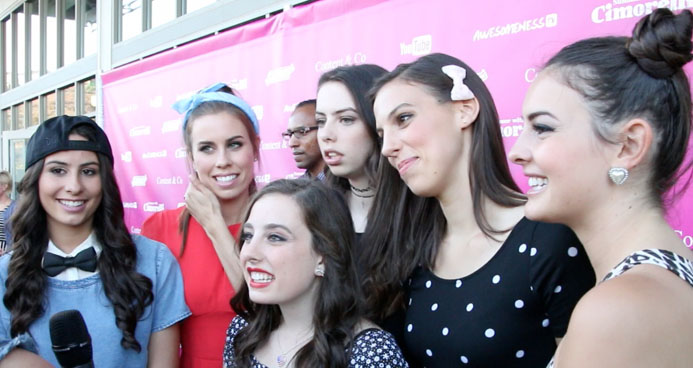 Cimorelli celebrate premiere of their web series ‘Summer With Cimorelli’

HOLLYWOOD-After gaining popularity on YouTube as a singing a cappella group, Cimorelli has exploded as a pop group phenomenon, They recently signed with Universal Records and this past Tuesday, premiered their new web series “Summer With Cimorelli” at the YouTube Space LA in Los Angeles.

Brought to you by Content & Co, SUBWAY® Restaurants and AwesomenessTV, “Summer With Cimorelli,” gives us a glimpse of the lives of a girl group that is on their way to musical stardom but must deal with having no money and no parents around during the summer before making it big.

The the six sister members of the group Christina, Katherine, Lisa, Amy, Lauren, and Dani greeted their fans before hopping on the red carpet for interviews and photo opps. The girls told Pacific Rim Video | Front Row Features Wire correspondent Chris Trondsen what to expect from their online  web show, “This show is based on us and our real personalities. You’ll get to see us around the house, being sick and doing crazy shenanigans and acting. We’ve never acted before.”

Awesomeness TV host Hunter March revealed that Cimorelli is a hard working music act since they told him that none of them messed up their lines once while filming “Summer With Cimorelli.”

You can also watch the recap of the lifestream of the “Summer With Cimorelli” premiere here https://www.youtube.com/watch?v=SOopxvuls8w