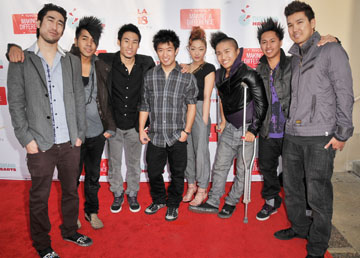 Quest Crew hosts “generationNext!” at the the historic Ford Amphitheatre

Coming August 7, 2011, PAE Live! presents “generationNext!” at the the historic Ford Amphitheatre. Uniting the hip hop dance and urban music community, this concert will feature the next wave of up and coming YouTube musicians, singers, comedians and dancers with portion of the show tickets net proceeds to benefit the ongoing Japan rebuilding efforts.

Hosting the event will be ABDC Season 3 champions Quest Crew as they introduce these new talents to the public. Starting off the show will be singer-songwriter, Dawen whose known for his smooth baritone voice and a sensual falsetto (a la Maxwell). Joining in the fray also is San Diego based singer/songwriter/performer J-Ricz brings a new wave of vision and creativity to the R&B/Pop genre.

Adding some Polynesian flair will be Las Vegas singer/song writer Mahi Crabbe showcasing his soothing vocals along with his infectious guitar strumming. Mahi is know for his fusion of island rhythms, reggae and Polynesian pop.

Official show sponsor Akufuncture will also bring its family of artists to the stage of “generationNext!” which include afterschool special, the San Diego-based band who describe themselves as “a musical hurricane on a collision course with awesome” plus The Fung Brothers who infuse hip hop music with their unique brand of comedy and singer/songwriter and YouTube hit Kevin Lien.

Vocal trio Innerlude will also join the list of performers in making this event a great night of music and dance.

Tickets, priced at $45 and $30 and are available at www.FordTheatres.org or at 323-461-3673 (for non-visual media 323 GO 1-FORD).  Through the Ford’s early buyer incentive, patrons who buy tickets on or before July 31 pay only $40 and $25.  Special $75 VIP tickets allow for premium seating, a souvenir, specially designed T-shirt and a private meet and greet with the artists prior to showtime. For Pacific Rim Video viewers and readers, please use the following code to receive the special discount: Quest