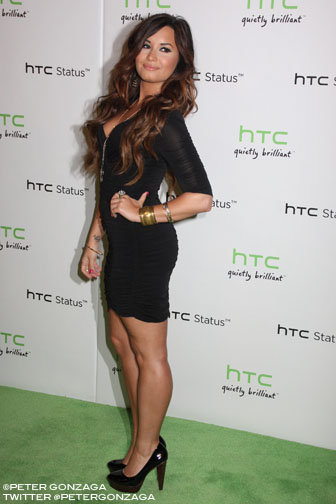 It was a crazy evening last Tuesday  of various celebrity filled events from the big “Captain America: The First Avenger” world premiere to this event dubbed “The HTC Status Social Launch Event” held at the Paramount Studios lot in Hollywood, Ca.

Making my way down from the El Capitan Theatre, this reporter rushed to get to the green carpet before the big celebrity guests such as Demi Lovato, Kathy Griffin and Darren Criss arrived on to the event. As I arrived, various celebrity guest were already lining up to take there turn to walk and pose for the photographers along with interviews by various media outlets on the press line.


The event celebrated the release of the new HTC Status phone. Guests were given the opportunity to play around with the phone which includes the first ever Facebook share button. According to HTC, the button combines “ease-of-use and depth of HTC Sense with the power and connectivity of Facebook™. With just one push of the Facebook™ share button, you can post updates, photos and videos for your friends to see.”

Aside from the phone. One of the most exciting highlights of the night was Grammy Award winning artist arriving on the green carpet to pose for the camera and do interview plus a special performance that was streamed live on the HTC USA Facebook fan page.

Trying to get Usher to look at my lens and pose for  my camera, this reporter embarrassing yelled out “Hey Usher, Oh My God.” It actually worked. An HTC rep who was capturing the event with the HTC Status phone laughed and said to his other colleagues, “He actually said the Oh My God to Usher.”

Demi Lovato received much love from the photographers as she posed up a storm for them. She was also gracious in making sure to interview with various media outlets including this reporter’s affiliate Pacific Rim Video. Lovato talked about her new single “Skyscraper” and who she talks to most on the phone.

Darren Criss also posed for the cameras. It looks like he’s getting used to the flashes as in previous events, one could tell that they bothered him.

Actor Michael Copon who has been dubbed the next “global Filipino sensation” by the Philippine press showed off his tattoos to Chris Trondsen of Pacific Rim Video explaining what each tattoo represented.  Interestingly, he created one of his own tattoos himself.