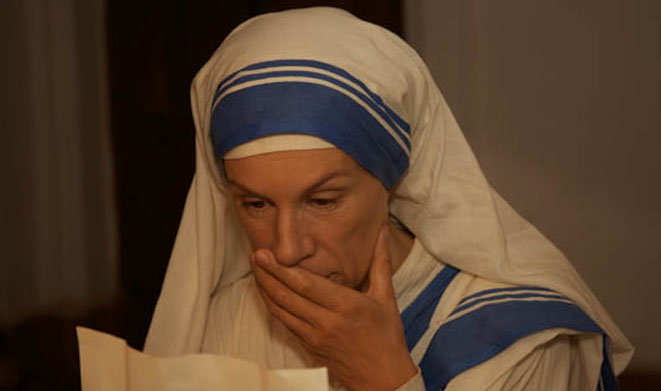 HOLLYWOOD—Juliet Stevenson recalls a moment of crisis when she saw herself for the first time dressed as and in makeup for Mother Teresa for “The Letters.”

“I looked in the mirror and thought, ‘Who are you kidding? This is ludicrous,’” the British actress candidly reveals by phone. “There I was standing as this iconic image, and I’m thinking, ‘Who am I—this middle class, middle-aged woman from London—portraying her. It’s absurd.’ I thought, ‘Oh God, I’ve made a terrible mistake. I’ll be a laughing stock.’”

Always up for a challenge, the stage-trained actress pulled herself together after the costume fitting and forged ahead into the character, and within the first day or two of shooting William Riead’s biographical drama, settled in and became comfortable in the role depicting the world-renowned Nobel prize-winning missionary nun.

Best known for her award-winning work on the British stage, Stevenson also has starred in films including “Truly, Madly, Deeply,” “Bend it Like Beckham” and the Truman Capote biopic “Infamous,” in which she played fashion journalist Diana Vreeland.

Though she had portrayed real people in other roles, Stevenson knew with “The Letters,” that she had a responsibility in crafting an honest portrait of a real woman who was beloved by so many for her humanitarian work, even though, physically, she looks nothing like her.

She says she was in agreement with the filmmaker’s choice to focus on the nun’s crisis of faith, which was revealed posthumously in her decades of confidential correspondence with a priest, Father Celeste van Exem, some of which were published in “Mother Teresa: Come Be My Light” in 2007. The drama is told in flashback with Max von Sydow, as van Exem, explaining to another church official (played by Rutger Hauer), about the personal struggles Mother Teresa expressed in her letters, all the while devoting herself to the poorest of the poor in India.

The drama chronicles how, after years as an educator in India, the Eastern European-born nun received a spiritual calling to help the poor in the slums of Calcutta, and despite the hurdles of leaving cloistered convent where she was assigned, she lobbied hard to receive special dispensation to do what she believed she needed to do, and establish a new order of nuns devoted to caring for the unwanted, the dying and the destitute.

Stevenson, a mother of two, says playing Mother Teresa was an unforgettable experience.

Q: Mother Teresa was known around the world for her tireless work with the poor. She also had detractors who disagreed with her opposition to contraception and the alleged substandard condition of the hospices she and her order operated. Did you have any trepidation or concerns about portraying her?

Stevenson: I did have some trepidation. I’d forgotten now, but I did. In some parts of the world, she is a controversial figure because of where she had placed herself in relation to those issues. I certainly wasn’t sure if I should play her anyway. I’m 5-foot-8, and she was 5-foot-1, for a start. I’m not tiny; I’m strongly built. I’m not a Roman Catholic, but then I maintain that we shouldn’t play people who are like us. Acting is about transforming. The further away from me I can get playing a role, the better. I often think it’s very liberating to play somebody who’s utterly different from you. It’s important to accept new challenges. Challenge and difficulty are the most important criteria to taking a job, so this ticked a lot of boxes. I got totally interested in it. To take somebody who’s an icon or legend and finding out who they really were—this living, breathing woman behind this worldwide image—was fascinating to me. I watched miles of film footage of her in interviews and documentaries. I watched her body language. That started to tell me quite a lot. I listened to loads of interviews and heard her talking in that strange cocktail of accents she had. It was a big journey finding her out but I really loved it. It was completely fascinating.

Q: Reading her published letters, did that help you gain insight into the real woman beneath the sari?

Stevenson: Hugely. I had quite a frustrating time, because I’d read everything I could about her—I read her own stuff, her own writing. You don’t know anything about the private woman from that. Then, I found an order of nuns on the edge of London, some of whom had actually worked with her in Calcutta. They were lovely and sweet, and told me about their working day, but when I asked them if there was anything about her that was difficult, they were completely loyal to her public image. So I didn’t find out anything very personal there, either. The letters are where you get a window into the private reality of the woman because she had this extraordinary crisis of faith. The letters are only to one man—her friend and spiritual adviser Father van Exem.

She writes often about this crisis of faith. She really thought that God had abandoned her. She writes about it as a woman talking about her husband or her loved one. She, literally, woke up one morning and he had gone. She spends the rest of her life wondering why he left her, and waiting for him to come back, not knowing whether he would, and not understanding why he did go. The writing is so personal, she could be writing about a lover, and that was really interesting. She uses the language of romance, really. But, of course, he left her and like any woman in that situation, she was full of grief and loneliness and isolation, and wondering why. What had she done to warrant this? That’s where you get a glimpse into the private woman and how lonely she must have been despite always being surrounded by people. She was intensely lonely, and I think that’s maybe why she connected so passionately with people who have nothing, who are abandoned on the streets, abandoned by society, because she had something in common with them.

Q: Did you talk to director William Riead about the flashback storytelling approach of this film? It’s not a conventional biopic.

Stevenson: The script was not something he wanted to alter. He chose, very wisely, to focus on one part of her life, and not on the whole life. He took this one central theme, which is this crisis of faith, and made it the center, the backbone of the story. It’s interesting to cover the period of her life, where she transitions from being a teacher to being called to go over the wall and out into the real world, and help the poor beyond the walls (of the convent). I like that we focused on that. It’s interesting how somebody can become obsessed about needing to be in the world and do some good, and the fight she had to be able to do that. Being blocked by the Mother General and her literal struggles with the Church, just to get out and get on with it, and in the end, she had to go to the pope. I think William made good choices on the parts of her life to focus on and, wisely, to leave the more controversial things out of it. Q: How long were you in India?

Stevenson: About eight weeks. It was a long time. I have children and family, and I did miss them, but they came out during the Easter holiday, which was the only way it was possible. They came out for two weeks, which was really lovely. I’d never been to India before but I’d always wanted to go. It was fantastic to be there that long and to be working, and not just there as a tourist. It was wonderful to be walking alongside an Indian crew who were fantastic. They were one of the best crews I’d ever worked with. There were many wonderful Indian actors. I really loved that experience.

Q: Did you get insight either from the Indian crew or the locals about how they felt about Mother Teresa?

Stevenson: A lot of the crew and the cast were very sophisticated and educated, from the big cities and progressive, you might have suspected them to have quite a lot of doubts about her because of the position she took on (subjects like birth control). Not the case, in my experience. In India, she is still universally loved and revered because of what she did for the poor.

How you think of her depends on where you’re standing in the world. If you’re in London or New York, you’re thinking about all those other things that she stood for, which are less acceptable. But when you’re in India, surrounded by destitution and poverty, and nobody’s doing anything about it, then you think of this woman who rolled up her sleeves and spent her whole life trying to do something about it and succeeding to some extent, then you think, it’s different. I had a great deal more respect for her. I really marveled at what she achieved when she was in India and saw the reality, because it’s still there, so much of it.

Q: Did you shoot in Calcutta?

Stevenson: They filmed establishing shots in Calcutta. But, unfortunately, I wasn’t there. We couldn’t shoot scenes there because it’s just too complicated. So I’ll have to go back on my own.

Q: You plan to return to India?

Q: As an actress, do you feel more responsibility in depicting a real person in a role?

Stevenson: Yes, definitely. I like that responsibility. They may have family alive in the world. Those people will watch you and you must reflect the person they knew. You can’t do that completely but that’s why it’s important to find the essence of somebody, because even though you won’t look quite the same, but if you find the essence, people will be happier.

Obviously, there were loads of differences between me and Mother Teresa, in appearance and so on, but I thought, “If I could find the animal in her, the spirit in her, then people wouldn’t really mind about the things that are not right.”