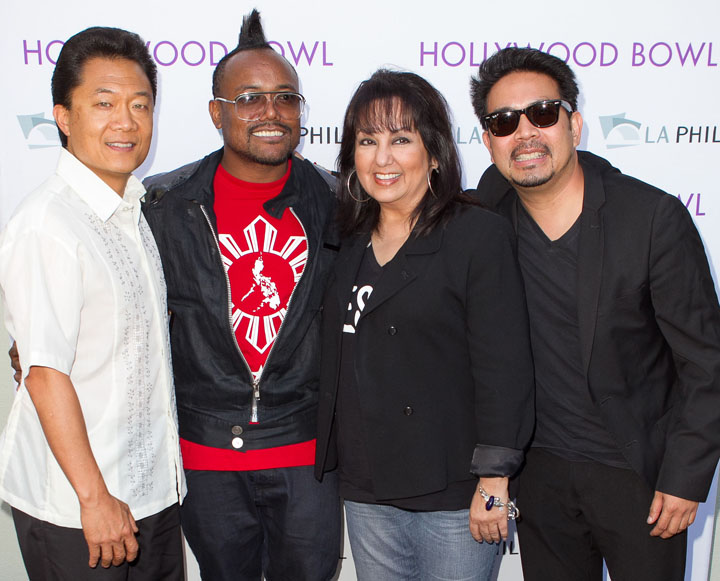 Black Eyed Peas’ Apl.de.ap takes us to the Philippines at the Hollywood Bowl

It was a historic day for Filipinos in culture and entertainment as the Hollywood Bowl’s COO Armind Menocha hosted the press conference for the upcoming show “Apl.de.Ap Takes You To the Philippines – A Celebration of Global Filipino” last Thursday, June 14, 2012. Joining Menocha was Black Eyed Peas Rapper and DJ Apl.de.Ap along with performers Gelo Francisco, Becca Godinez and Kamayanan Ng Lahi Filipino cultural dance troupe director Joel Jacinto to share in the celebration of Filipino music and dance from the traditional to the contemporary.

The Black Eyed Peas member explained that this event happening on July 8, has never been done before in which the old and new of Filipino culture has been brought together on the historic stage of the Hollywood Bowl. It is a celebration of Apl.De.Ap’s Filipino Heritage with music, dance and all out partying featuring traditional Pinoy (Filipino) artists, hiop hop, OPM (Original Pilipino Music) and more.

The show will be broken down into two sections, the first portion of the program beginning with filipino dance group Kayamanan Ng Lahi and the traditional filipino guitar group the Rondalla Club of Los Angeles performing “Jota Paragua,” a Castillan influence dance of flirtation between the ladies and gentlemen. Illustrating the traditional courtship and romance through music and song in the form of the ever fading custom of serenade, The Harana Kings will perform once popular courtship songs. Gelo Francisco mentioned that this is also a historic event for the Harana Kings as this will be their first ever performance in the United States.

The second portion will open up with comedian Jo Koy along with cultural dance troupe Kayamanan Ng Lahi performing modernized tinkling accompanied by dance crew Culture Shock. Apl showed us his tinkling dougie during our interview.

Apl will close out the show with Nicole Scherzinger and fellow Black Eyed Peas member will.i.am and Taboo.

Hosting the night will be Vanessa Hudgens, Lou Diamond Phillips and Jo Koy all on July 8, 2012 at 7pm. More information along with ticket purchase info is available at hollywoodbowl.com