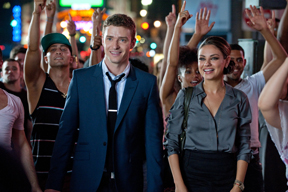 The “Benefits” of two

Mila Kunis and Justin Timberlake seem like they’ve known each other forever. They finish each other’s sentences and seem to be in sync on virtually every subject as they answer questions about their new comedy, “Friends With Benefits.”

Timberlake plays Dylan, a successful Los Angeles art director recruited by headhunter Jamie (Kunis) to New York for a job at GQ magazine. As their friendship develops, they wonder why two friends can’t just add the benefits of sex without the typical entanglements of a committed relationship.

Moviegoers and critics might label “Friends with Benefits” as a romantic comedy, but Timberlake and Kunis think it’s more than that.

Dressed casually in a tan linen jacket, beige top and blue jeans, Kunis takes a quick sip of her iced coffee and explains, “We always thought of it as comedy rather than a romantic comedy. If anything, it was a two-hander _ like a buddy comedy with a little romance in it.”

Though there’s quite a bit of implied sex, Timberlake says it’s not a sex comedy either. “Those are the moments that happen that nobody talks about, and it’s almost like if you don’t say that it’s happened and don’t acknowledge them, then it’s almost like they didn’t,” he says. “We wanted to make them funny.”

It wasn’t difficult for these two attractive performers to get physical after getting to know each other in workshops and rehearsals. Illustrating their playful banter, Timberlake explains how hard it was to do the intimate scenes with his lovely co-star.

“It took a lot of work on my part,” he jokingly assures. “I was a bit upset when I found out we were going to be sharing a bed together. I was like, ‘eww, gross.’ But I did it because I’m a pro.”

Kunis quips, “You sucked it up. You took one for the team.”

“We would find every way that we thought was wrong, so we could find the way that was right,” Timberlake continues. “When you do that, it’s just the two of you. You become friends.”

Timberlake recently played cupid to his new pal, convincing her to accept an invitation to a military ball from a young U.S. sergeant stationed in Afghanistan, who posted a YouTube video asking Kunis for a date.

Joining Kunis and Timberlake in the “Friends with Benefits” cast are Woody Harrelson and Patricia Clarkson. Harrelson plays Dylan’s macho sports-columnist co-worker who happens to be gay and proud.

“Woody is one of a kind,” compliments Timberlake. “He’s a fantastic actor. To have a charming goofball play that character, we just thought what a great juxtaposition to kind of break these stereotypes.”

Clarkson plays Jamie’s mother, Lorna, and Kunis has nothing but praise for her onscreen mom.

“She was absolutely brilliant,” she says. “She came in and created a character out of nothing. “

Kunis says Clarkson was able to bring a certain quality to Lorna that helped explain her own character’s attitude towards men and relationships. The absence of a father figure in Jamie’s life directly affects her idea of Prince Charming, she says.

The fictitious couple’s backstories are what Timberlake, along with director Will Gluck (who previously helmed the hit comedy “Easy A”), wanted to explore. They hope audiences can relate to the couple’s modern-day predicament.

“When I finished watching the final cut of the film, I was like _ at least for me _ it speaks to my generation,” says Timberlake, who is single. “For every generation that comes around, things change and we evolve, and we do the opposite of evolve. We digress and I think we just wanted to make a real situational comedy from a male and female perspective the way two people who are close to the same age see the world.”

“Friends With Benefits” marks the first time Timberlake and Kunis have toplined a movie, though they both have had supporting roles in other movies. They don’t feel the pressure, though, of waiting for the box office numbers to come in.

“We already deal with those demons before we sign contracts,” Timberlake says. “After you commit to the movie, you have to let that stuff go. I will be a little more vulnerably honest in saying that it’s a two-hander and that was a little bit of comfort knowing that you’re going to be sharing the role and the comedy and the whole movie with a counterpart.”

Kunis says she ultimately wants the audience to feel like they a part of the film.

“I think keeping a person’s interest, you have to get them involved and make them care for the people,” she says.