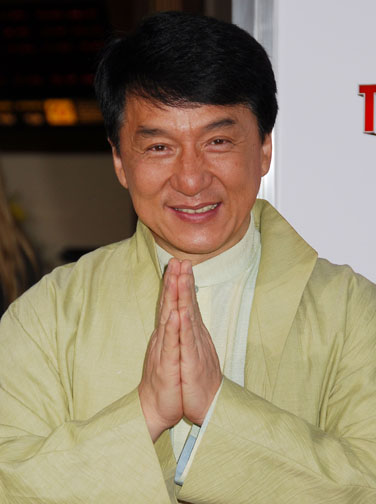 Spy Next Door Premiere takes over The Grove Los Angeles

It was an early morning premiere that took over The Grove Shopping Center in Los Angeles. Peeking out of their spy binoculars, Jackie Chan, Amber Valleta, Billy Ray Cyrus, George Lopez along with the rest of the cast of “The Spy Next Door” made their way to the red carpet for the world premiere as fans waited patiently to catch a glimpse of the stars. Surprisingly for an early morning premiere, there was already a line of parents and kids waiting to watch the film.

Jackie looked excited in his lime green suit while Billy Ray Cyrus just thought it was a dream to be working with Jackie and George Lopez. In an interview with this reporter’s affiliate Chris Trondsen of Pacific Rim Video, Cyrus said, “Being in between a Guy like George Lopez and Jackie Chan, that’s is dream come true for an old boy from Kentucky.”

Playing Jackie Chan’s on screen girlfriend, Amber Valleta jokingly mentioned, “It was hot. I didn’t know if I should tell my husband that I was falling for him…No..Jackie’s Amazing! We had great chemistry. Very friendly and easy…so it was good.” Ms. Valleta wore nice bright orange dress with butterfly shoulders to accent her “modelriffic” shoulders.

An interesting trivia about the bad guy played by Magnus Scheving is that he is the writer, director, producer of the highly popular Lazytown in which he plans the good guy. Scheving was able to do most of his stunts since he’s done quite of bit on his children’s show.

For children and parents alike, this is a family movie. Jackie Chan plays Bob Ho, an undercover super spy who is ready to hang up his spy duties to settle down with girlfriend Gillian (Amber Valleta). However, Bob must win over approval from Gillian’s children. He’s given that opportunity as Gillian is called out of town which Bob takes advantage by babysitting her three children. Unknowingly, one of the children re-activates Bob and must take the kids on his spy mission leading up to a comedic end.

Through the  mission of the red carpet premiere celebrity guests that showed up to the premiere included Debby Ryan, Gregg Sulkin, Boo Boo Stewart and Noah Cyrus.