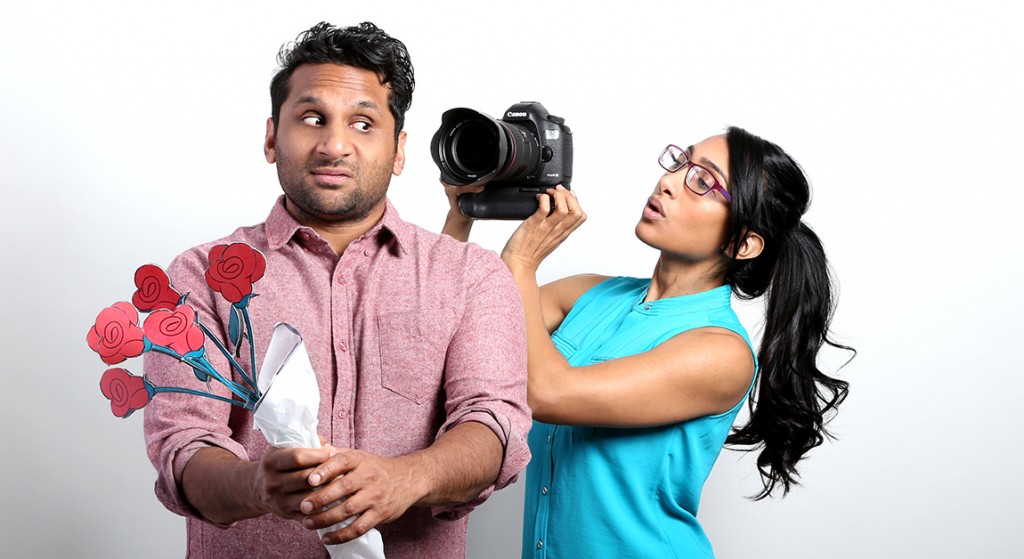 The veteran comedian—he previously appeared on popular comedy series such as “Scrubs,” “It’s Always Sunny in Philadelphia” and “The New Normal”—also is the central figure in a funny and engaging documentary about his life called “Meet the Patels,” rolling out in theaters. It’s a true family affair, with his sister, Geeta, serving as director and off-camera commentator as Ravi, an Indian-American, attempts to appease his Old World parents by launching a exhaustive search to find a woman to settle down with.

Not just any girl will do. Ravi’s parents want him to marry an Indian girl, and specifically a woman from a region of India where the predominant last name is Patel. Little do the ‘rents know, their nearly 30-year-old son already had a longtime girlfriend—a white American girl named Audrey. Still recovering from a breakup with Audrey, Ravi seizes the opportunity to travel to India (with his family in tow) to meet potential mates.

Failing to find a suitable match there—and still yearning for Audrey—Ravi returns, and then embarks on a North America dating tour. Geeta does her best to be as unobtrusive as possible with the camera in documenting Ravi’s efforts to find Ms. Right. Again, memories of good times with Audrey haunt Ravi. Will Ravi be able to find true love and satisfy his parents? Will his parents allow Ravi to find love outside his ethnic group? Will Geeta become the next target? Viewers will have to see the movie to find out.

The documentary combines Geeta’s live-action footage of her family’s humorous interactions, along with occasional animation and a soulful soundtrack. Already a sensation at several film festivals including the Los Angeles Film Festival, the Traverse City Film Festival and the Mt. Hood Independent Film Festival, “Meet the Patels” offers a universal story about love and family that audiences will not soon forget.

Ravi and Geeta Patel recently spoke by phone about their collaboration, which took roughly six years to complete. Thanks to support from PBS and their producers, the siblings were able to turn a simple idea about their family into a fun-filled documentary.

Q: When did you decide to make a movie?

Ravi: We started filming before we knew we had a movie. It started with Geeta learning how to use a camera, which I like to say she never did.

Ravi: She had just finished directing a (political) documentary called “Project Kashmir” (about the war in that Southeast region of Asia). She wanted to learn how to use the camera. So she brought it along on our trip to India. That’s where the film starts. During this time, our mom and dad are throwing heat at me for being single. Geeta and I would have these conversations. So when we got back from the trip, we decided we had something (on film), so we sent our raw footage off to PBS and they were like, “Yes.” And that was the beginning.

Geeta: It was really Ravi’s idea. I didn’t want anything to do with it. This was like the one subject I didn’t want to talk about. I’m more into covering other people’s stories, not my own or my family’s. Ravi wanted to more of a Morgan Spurlock type of thing—something more journalistic. This is the situation of the Patels today. Whenever you send raw footage to PBS, they know you’re going to clean it up and reshoot some nice footage. My voice behind the camera is going to go away. Instead, they told us they wanted that intimate, crazy, non-traditional raw footage was quite interesting. Ultimately, it spoke to what the film became in the end, which is we thought it was going to be about what it’s like to be Indian and in our community, and the pressures associated with that. But what it ended up being is this very universal film about family. They told us they liked the interactions between us and our parents and encouraged us to keep going with it. They trusted us as we went along for the next six and a half years trying to find the voice of this film.

Q: The viewer witnesses your frustration sometimes, Ravi, especially when you tell Geeta to turn off the camera, and then she surreptitiously turns it back on in the backseat of the car and continues to film you.

Q: Were there times when you wanted to give up and give up your search for the woman of your dreams? That could be embarrassing.

Ravi: It was. I didn’t expect this to be about me when we started making it. It sort of evolved into it before I could stop it from happening. Ultimately, I found comfort in that the people who love me and, as long as I’m honest and trying my best to be authentic, then I would be able to live with whatever ended up on camera.

Q: There are many cultures that push their kids to get married. Have you heard from viewers who said they could relate to your plight, Ravi?

Ravi: You would not believe how much of that we’ve been getting. I have a lot of Jewish friends and they have moms that are a lot like my mom in that regard. When we took this to festivals, we were selling out every show simply by word of mouth. The audiences were so diverse that we realized that people were relating to the basic conflict from the perspective of—very broadly—love and family. People would find parallels to their own circumstance. A gay couple told us they saw it as a coming out story. Everyday American families were telling us, “Yeah, we get this. We know what it’s like to be lonely and looking for love. We know what it’s like to feel like you’re disappointing your parents, and you just want to make them happy.”

It’s been a touching journey in the sense that we’ve seen what a diverse group of people this film as affected.

Geeta: I’d say that about 2 percent of our audiences, maybe less, have been Indian. Our audiences are mostly not Indian and yet we’ve been selling out festivals for about a year. That’s how the theatrical release happened. Audiences kept showing up and the shows were selling out. We were like, “Oh my God! This is great.” It’s what we wanted. Ravi and I wanted to make a film where in a time where divorce is at an all time high, relationships on film and on television are so much about dysfunction, and the American family is changing, the idea of family is under fire, and yet here we were discovering the beauty about family. If there’s a problem, if you keep going, there is this miracle on the other side of it. We all experienced it through the film. It’s awesome to have it on film to show other people. We were just excited that it was something that people were relating to.

Q: It seemed you belong to Audrey from the outset. Was it your intention to present this as a love story?

Ravi: No. It was my life in real time, so I didn’t know what to expect. All I knew was that I had to hide this white girl from my parents while they’re sending me pictures and matrimonial resumes of girls with the same last name as me, and expecting me to go on blind dates with them. I knew that was kind of weird. I knew other people would find it weird. That was the only thing I anticipated. It’s weird but it’s also funny.

Geeta: Because we were filming and editing it, halfway through we had the first and second act built, but we didn’t really know how it was going to end. We just wanted to bring to light what Ravi was going through—all the different feelings—and we had to do it with the footage we had. We literally waited to see what the ending would be. We were on pins and needles while we were shooting and while we were living our lives.

Q: How would you describe this experience?

Ravi: It’s magical. It’s really a once in a lifetime experience, and to be able to share it with our family is really special.

Q: Geeta, what’s happening with you?

Geeta: I wrote another film that I’m going to be directing called “Mouse.” It’s an action feature produced by Grant Hill (“Cloud Atlas”). I’ve been developing it for six years. I’m excited about it. It’s something I’ve been waiting to do. Ravi and I are working together on some other projects. For the next year, we want to dedicate ourselves to this documentary and getting out there because it really changed our lives and I’m sure it will touch others as well.