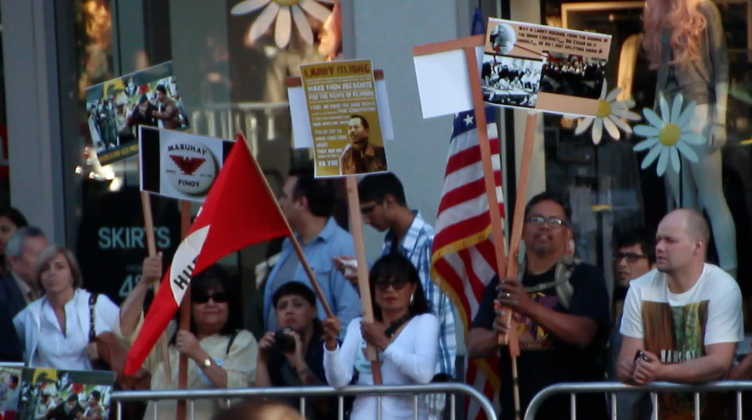 Rosario Dawson and America Ferrera at the premiere of “Cesar Chavez” held at the TCL Chinese Theatre. ©Sthanlee B. Mirador/PRPP/FRFW

HOLLYWOOD—It was a night that Cesar Chavez supporters have been waiting for, the biopic “Cesar Chavez,” directed by Diego Luna premiered at the TCL Chinese Theatre this week. The red carpet premiere was a historic moment for the UFW as UFW co-founder Dolores Huerta attended the event held at the TCL Chinese Theatre with the film’s stars walking the carpet including Michael Pena (Cesar Chavez), Rosario Dawson (Dolores Huerta), America Ferrera (Helen Chavez), Jacob Vargas (Richard Chavez) and Wes Bentley (Jerry Cohen).

Actor/director Diego Luna takes his biopic version chronicling the birth of the farm workers labor movement led by civil rights leader and labor organizer Cesar Chavez. His drive to bring fair wages for farm workers also rocked the core of his family. The film spotlights the non-violent Chavez as he fought prejudice and greed in the farmlands of America.

While the celebrities and their guests celebrated the epic film, a group of Filipinos including Filipino-American labor leader Larry Itliong’s son Johnny Itliong joined others in showing their disappointment of the depiction of Filipino labor leaders that stood side by side with Cesar Chavez, Dolores Huerta, Al Rojas and others as the Agricultural Workers Organizing Committee (led by Itliong) and National Farm Workers Association would merge to become known as the UFW.

According to an interview Johnny Itliong gave to broadcast journalist Steve Angeles of ABS-CBN after watching the film premiere, Itliong stated, “It’s an injustice to my father that he is not at that table (referring to pivotal scen in the movie) and that was everything that he fought for was to get the bargaining rights on that piece of paper and in the movie it shows him in the crowd as a spectator and that’s not right in my heart and I don’t think it’s right for our Filipino community to be a spectator to something that he was a major player in.”
Director Diego Luna at the Hollywood premiere of “Cesar Chavez.” ©Front Row Features

Many Filipino descendants of the farm workers echoed the same sentiment of Johnny Itliong. However they add that they are not looking to take away from Cesar Chavez’s work and the accomplishments he brought to the farm labor movement, but to ensure that the huge involvement of Larry Itliong and other Filipino labor leaders known as the “Delano Manongs” are credited in the strikes/protest in Delano and helping form the UFW. Director Diego Luna poses for the camera during the premiere of his film “Cesar Chavez.” ©Sthanlee B. Mirador/FRFW/PRPP.

Respected journalist Prosy De La Cruz added in a recent Facebook post to this writer, “”Artistic expression is unique and particular to one’s soul, and art is the language of the soul. But, even before the soul can articulate what it wants to express, there is the knowledge in one’s mind that should be based on accurate historical facts. When a film shows the opposite of what history was, for example, that Cesar Chavez had to be persuaded with, not once, not twice, not thrice, but four times by Larry Itliong and his colleagues, including the passionate Phillip Vera Cruz, and that Larry Itliong had to use all his persuasive skills for Cesar Chavez to join their strike, a Cesar Chavez that did not believe as yet on the strength of his union, and only when Larry Itliong and even Dolores Huerta (who publicly asserted in a gathering in the Bay Area in front of 400 folks, that she had to persuade Cesar to go on strike), this film is fictional in that regard!”

Aside from the protest, celebrities were excited to share in the success of the Hollywood premiere including Paulina Rubio, Dayanara Torres, Nick Wechsler, Connor Paolo, Amber Tamblyn and Lisa Ling.

Singer Paulina Rubio blew kisses to the photographers while Diego Luna had to take a moment to tell the shouting shutterbugs that he will make sure to give them their photo opportunities.

Rosario Dawson was looking pretty in her form fitting lightly pink colored dress. America Ferrera and Rosario were having a ball posing for the photographers in their two shot.

Michael Pena’s son was a ham for the camera as he posed with his dad and pointed to various cameras for photographers to take their shots.

Producers hope that the film shoots to the top of the box office. “Cesar Chavez” opens in theaters on Friday, March 28.